Mikhail Ivanov practically grew up in the bookstore Podpisnye Izdaniya ("Subscription Publications") as both his grandmother and mother worked there. But he never thought that he would inherit the business and turn the bookshop into a St. Petersburg landmark.

Mikhail, tell us your story.

Up to the age of seven, I lived on the Petrograd Side, but then we moved into Prospect Prosvescheniya [far north of St. Petersburg], where I lived until I was 18. So my personality was formed there, it this “ghetto.” And during that time the reality was like in the movies about the wild 1990s: drug addicts, suicides, dirt, not the most favorable neighborhood. At the age of 18 I moved to the city center, studied on Vasilievsky island in the Russian Presidential Academy of the National Economy and Public Administration. Today I live near Tavrichesky Garden.

I always wanted to live in a city center, because going there was entertaining when I lived on Prosvescheniya (to a large extent there is nothing there). And my friends went to the city center every weekend, walked on Palace Square and it was real draw for us. Because if you live in such a monotonous “sleeping district,” then you will not hesitate to take a 40 minute metro to get into the middle of a splendid, historic city.

There is a park in my current neighborhood, where I can walk with my kid; my work is just a 15-minute walk away, and 5 minutes by car. Everything is nearby, you can easily get to Nevsky Prospect or to the Summer Gardens; everything is very convenient logistically. But at the same time it’s quite calm and there is no traffic like on the major streets. Nevertheless, you are still in the historic heart of the city.

Your grandmother and mother both worked in Podpisnye Izdaniya, a bookstore where Soviets were able to acquire Russian classics and high-quality books. Do you have childhood memories you can share?

I feel I’ve been here since the moment of my birth. I recall the old days when the shop owned a huge space on the second floor. There was a study with a green sofa, where I spent many hours and days. Podpisnye Izdaniya had to move out of there in 2008, and, since I was born in 1987, it means that for 21 years I constantly visited my relatives. Sometimes I even slept on that green sofa, did little tasks, but never thought I would connect my life with it.

And how did you end up in this business?

Out of despair (laughs). But, to tell you the truth, it was all very simple. Before I graduated from the Academy, I had to do an internship, so I chose the big bookstore chain Bookvoyed. My diploma was connected with retail and nontrivial technologies in marketing and advertising. I deliberately got involved in commerce (and not state service), had some practical experience, and later got a job there. I worked there for two years and later decided to try selling books on my own. But somehow, in my mind, Podpisnye Izdaniya was not connected with my future career. When I asked my family for help (actually the money for the business), they said: “Are you a fool? You have everything here! Take the store, develop it and make something out of it.”

At that time, the store wasn’t profitable, so they gave it to me without any regrets and worries. I started working on a new concept, which took me six months. I realized that we needed to “break everything and rebuild it from scratch.” So I came in January 2012 and in August we reopened the store.

Why was it important for you to create the shop’s own souvenirs dedicated to St. Petersburg?

It wasn’t fair that such city as St. Petersburg had only monotonous “made in China” souvenirs. We wanted to offer some non-book products, but after research found that there was nothing on the market. That’s why, with the help of local artists we decided to fix this. These days we produce pins, bags, postcards, bookmarks, magnets, and notebooks with stunning views of the city and even publish our own books. 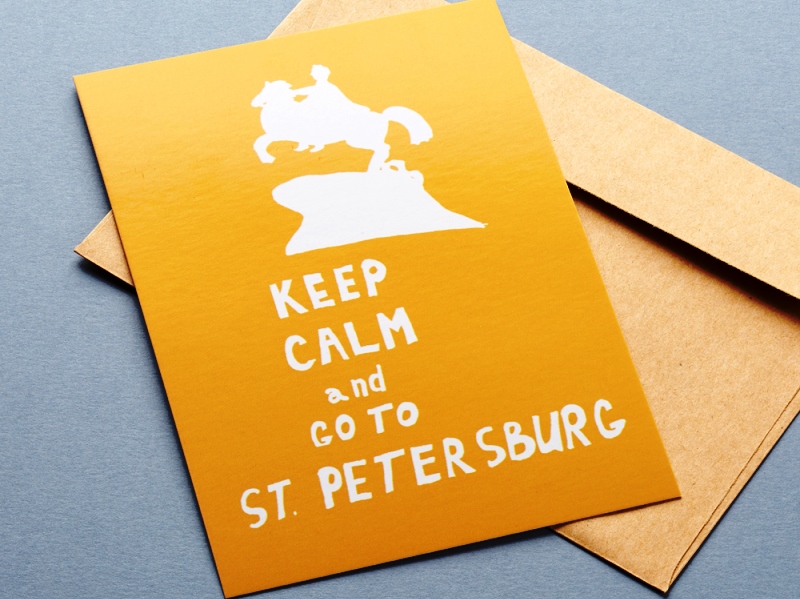 I don’t have so much time to visit places these days. But first of all, I recommend restaurants, because there is a gastronomic boom happening in St. Petersburg. In any case here Duo Team wins, those guys who do the Duo Gastrobar, Tar Tar bar and Duo Asia – all these places resonate with me.

Then anyone must visit New Holland Island. At least to see that there is something modern and interesting in such a historic city like ours. But of course it’s better to amaze foreigners with our cuisine…

At the same time, I recommend paying attention to the Art Nouveau architecture in St. Petersburg. Especially when it comes to buildings by the architect Nikolay Vasiliev, for example one of his gems – the Great Mosque on the Petrograd side.

In general, I recommend exploring the whole Petrograd Side, because tourists rarely get there. I also love the house of the architect Alexey Bubyr on Stremyannaya Street [built in cooperation with Nikolay Vasiliev]. Our store is also located in one of those Art Nouveau buildings created by Vasiliev. For me, he is one of the greatest architects, if a little underrated. In fact, after the Revolution of 1917 he went to the US, but unfortunately wasn’t able to realize his potential there.

We begin a new project, in which readers meet regular St. Petersburgers, to learn about their lives and their favorite places in the Northern Palmyra. First up: coffee!

St. Petersburg was founded in 1703 as a port on the Baltic Sea, and about 10% of its surface area is water. So we meet a boat rental company owner and find out the best place for pizza in the city.

Graphic designer, traveler, instagram explorer, Katya Kotlyar knows her home city inside out, and sees it as an artist would, as a beautiful backdrop for living.

St. Petersburg is often thought to be a gray city, as it only has about 75 sunny days each year. Still, photographer Segrey Goorin finds inspiration here for his black and white photography, capturing street life, extraordinary locals and numerous parties.

Ekaterina is an artist who is constantly sketching in St. Petersburg bars. Her hobby led to the creation of the Instagram blog “Between the Bars,” where she captures the city's bohemian atmosphere.

Dusya is a Vasiliyevsky Island local, whose job it is to promote a creative space located on the island – Sevkabel Port.

Nikita was trained as a philologist, but gave it all up to co-found a craft brewery.

Kseniya is an architect, who found her passion in jewelry making.

Mikhail is the director of a book store that has been operating in St. Petersburg since 1926.

Few Russians know who Julia Child is. Yet Darya still chose to name her restaurant after the iconic American chef.

Given all that has been going on, we thought it would be a good time to check in with some of the people we have profiled in Piter's People and see how they are doing.

Maxim is a blogger and photographer who helps everyone to see the charm of St. Petersburg historic apartments.