Sometimes when I’m stuck at home or drudging through a particularly difficult day at work, I like to look at Airbnb listings for unique accommodations in faraway vacation destinations. Usually, these are places I have no chance of getting to at the present moment (not to mention affording), but looking at the pictures and imagining myself sitting in a hammock on the beach is a level of unique wish-fulfillment that helps to put my mind, even for just a small second, at ease.

I suppose that skimming through a travel guide or brochure must have been the twentieth century equivalent of this. You can open them up, and the colorful pictures will take you almost anywhere you want to go. Nowadays, old-fashioned physical travel guides seem almost like time machines rather than teleportation devices. Unlike Airbnb, they can’t be updated regularly, so they can tell you a lot about what a specific place was like at a specific time or at least what that place wanted you to think it was like.

I'm looking at a copy of a travel guide called Your Trip to the U.S.S.R., published by the Foreign Languages Publishing House in Moscow. My great-uncle actually acquired the book when he traveled to Russia during the 1960s. When he found out I was studying Russian in university, he donated many of his old souvenirs to me, but I’ve always found this little teal book to be the most fascinating. It's well worth flipping through and looking at some of the more interesting parts of the guide!

The first thing I noticed when I opened the book was the Note to the Reader section. In the brief preface, the writers make a point to emphasize the importance of developing “mutual understanding” through travel and tourism. According to the text, this is the reason that the country is spending such large amounts of money expanding the Soviet tourism industry. Of course, they don’t mention the economic benefit that a country receives from having foreign tourists come in with their foreign money, but, then again, what communist country would? Also, while the tourist manual wasn’t officially published by Intourist (the U.S.S.R. agency for foreign travel) it did give them plenty of shout-outs, especially in the first few pages, so there seems to be some connection here.

Another interesting section gives advice on how to plan your trip. When describing when to travel, the guide only describes wintertime in Moscow as being “moderately cold” (which is laughable, even post-global-warming). According to the official guide, the best time to visit the Soviet Union is whenever is most convenient for you; however, speaking from experience, unless you are prepared to wear some serious snow gear, don’t go to Siberia in the winter.

It’s also interesting that they only encourage you to bring “the vital necessities,” for everything else you could ever possibly need could be purchased once you arrive in the Soviet Union! A rather strange marketing scheme for a country supposedly without a free market…

Of course, the information about documents and border control is a wonderful reminder that some annoying bureaucracy never changes. The long-adored Russian tradition of registering your passport at every hotel you visit still happened back when Russia wasn’t really Russia. But the list of items that you are allowed before you need to declare them is also pretty humorous: one bicycle (how?), “a reasonable amount” of souvenirs (whatever that means), and no more than three items of woolen goods (which isn’t nearly enough if you are going to Russia in the winter). However, most of the strictly prohibited items are about the same as they are today (seeds, plants, etc.), that is with the glaring exception of “printed matter… harmful to the U.S.S.R. from a political or economic point of view.”

The book then lays out some of the different excursions and ways to get around. They give the prices for different meal plans, and I was amazed to see that you used to be able to get a deluxe dinner for only three rubles (maybe the current price for a small pack of gum today)! They also describe the rules and costs for renting a Moskvich (car) and driving yourself around the country (both with and without accident insurance, which I absolutely cannot fathom doing). They also describe some day tours you could go on with Intourist. They list lots of ordinary touristy things to do, such as visit museums, shopping centers, and parks, but they also used to give special tours of schools, universities, factories, and collective farms to foreigners as well.

Next, we have some parts that detail a rather white-washed version of Soviet/Russian history and a description of modern life in the country. We get a pretty interesting description of the “Rights of the Soviet Man.” Of course, the authors make a very big deal about gender equality and workers' rights, but they also mention a citizen’s guaranteed freedom of religion and their right to the privacy of their home and a fair trial by law. At a time when the American second wave of feminism was really in full swing, I think that it was no coincidence that this book chose to make such a big point that women in the U.S.S.R. did earn an equivalent salary and education to their male counterparts. On the reverse side, the authors’ claims about criminal justice and privacy are a bit harder to validate but show the country’s keen perception of how it was viewed by the rest of the world.

This section also talks about consumer products and agriculture, but rather than glossing over any flaw in the system, they do in fact acknowledge some lack in this part. The book fully admits to the housing shortage in the quickly-growing cities, as well as the shortage in household goods and food items (such as meat and butter). In an attempt to turn these lacks into positives, the book outlines plans for how the country planned to overcome these limitations in the last part of the twentieth century. While it was meant to make the reader feel inspired by the potential for the communist state, I can't help but read it and feel a tinge of sadness.

Our historical hindsight reminds us that many of these grand plans (for example, they proposed that by the end of the 1980s every family would live completely free in a comfortable apartment) fell very short of their initial goals. That, I think, is the most remarkable thing about this travel guide. It not only is able to take you on a trip through a nation that no longer exists, but it almost gets you to imagine one that never would exist either. 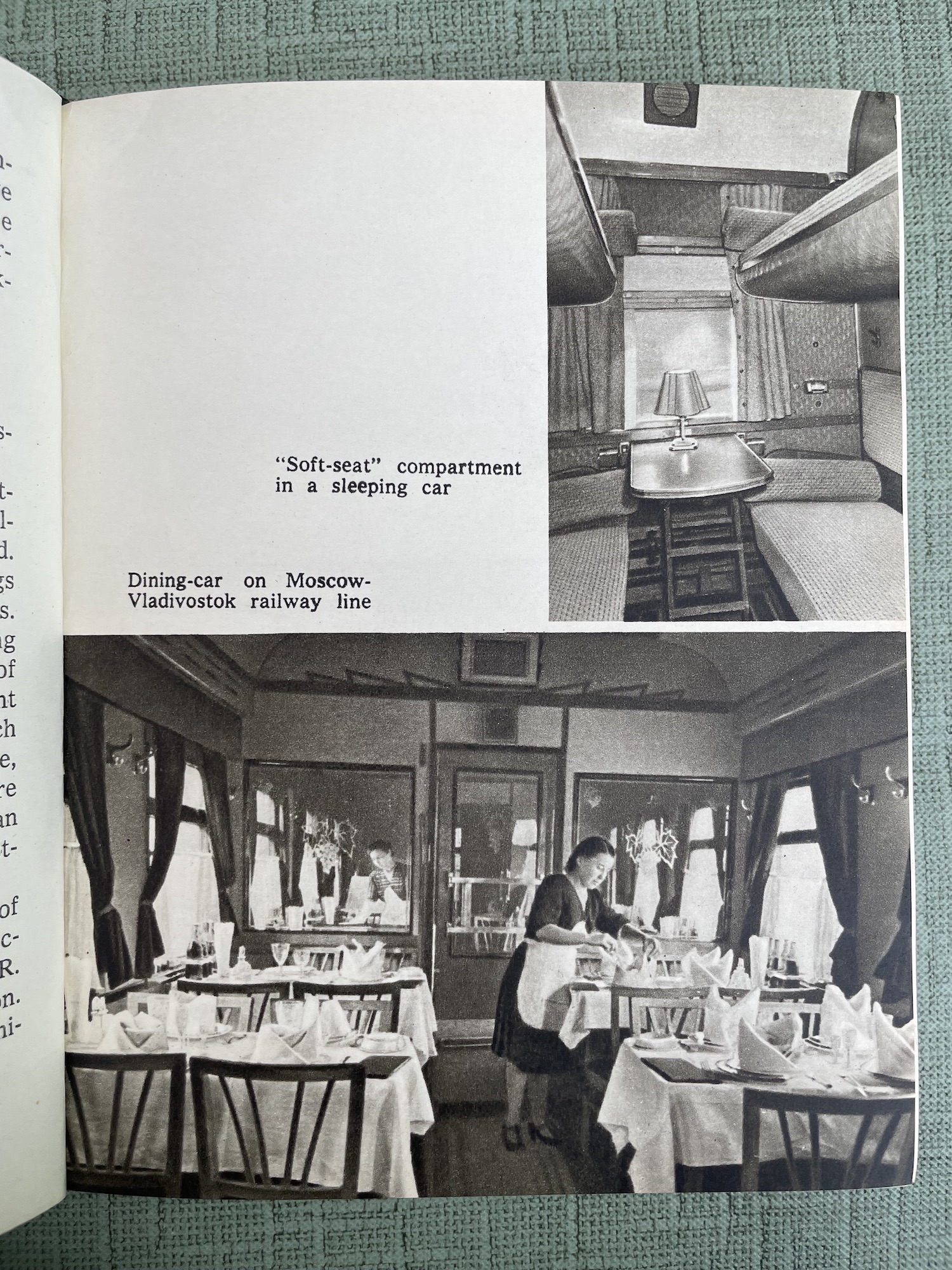 Tips and information on riding Russia's railways, for short or long trips.

A Memory Battle for Lubyanka Square

The hoopla surrounding a new monument at a controversial location in central Moscow highlights the importance of history for Russia – and ourselves.

Get Your Cold War On