The first new translation in half a century

This edition of The Little Golden Calf, one of the greatest Russian satires ever, was the first new translation of this classic novel in nearly 50 years. It is also the first unabridged, uncensored English translation ever, and is 100% true to the original 1931 serial publication in the Russian journal 30 Dnei. Anne O. Fisher’s translation is copiously annotated, and includes an introduction by Alexandra Ilf, the daughter of one of the book’s two co-authors. It also won the most prestigious annual book award for Best Translation into English.

The famous satirical sequel to The Twelve Chairs resurrects the con man Ostap Bender, “the smooth operator,” and follows him and his three hapless co-conspirators on a hilarious romp through the Soviet Russia and Central Asia of 1930.

Bender says he has “very serious differences of opinion with Soviet power. It wants to build socialism, and I don’t.” The smooth operator wants to emigrate to Rio de Janeiro, so he and his crew set off in pursuit of an underground millionaire, who, Bender is certain, “will bring me his money himself, on a little saucer with a sky-blue rim.”

One of the greatest works of Russian satire of the 20th century (the 1932 American translation billed it as “The book that’s too funny to be published in Russia!”), this lively new English translation is the first since 1961.

The Little Golden Calf stands alongside the works of Griboyedov, Pushkin, and Gogol for its profound effect on Russian language and culture. The tale overflows with trenchant catchphrases and legendary literary episodes, offering a portrait of Russian life that is as funny and true today as it was when the novel was first published. For decades, foreigners trying to understand Russia have been advised to read the adventures of Ostap. This new translation makes them more enjoyable than ever! 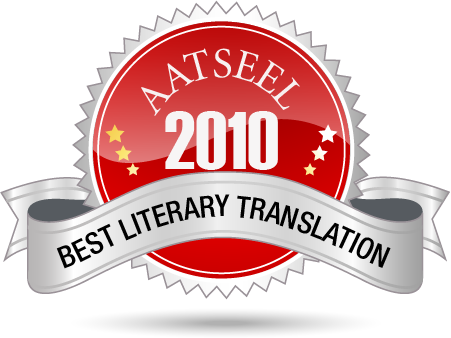 “Conveying cultural difference is always a challenge to the translator, but conveying the cultural difference peculiar to humor is a particularly daunting challenge. The rare translator who rises to the occasion deserves special recognition. Anne O. Fisher is just such a translator. She has not merely given us yet another Little Golden Calf in English (it is the third); she has given us one that will elicit the belly laughs Ilf and Petrov are famous for. She has also done so without sacrificing accuracy, thereby giving the lie to the bromide traduttore traditore, “the translator is a traitor.” This and the fact that Fisher wrote her dissertation on The Little Golden Calf and The Twelve Chairs vindicates the translators' new mantra: translation is interpretation. Part and parcel of the translation are the essential and unfailingly illuminating notes. Thanks to Anne Fisher, Ostap Bender never had it so good: she has given him a whole new audience.”

“The translation is fluent and accurate, and best of all (from my admittedly peculiar point of view) it's got all the apparatus you could want: over 300 endnotes explaining cultural references, an introduction by Alexandra Ilf, Fisher's own foreword, a bibliography, an appendix explaining characters’ names, and (mirabile dictu) a bilingual appendix of phrases from the novel that have become popular among Russians... if you want to understand the book in its full cultural and historical context, this is an ideal version.”

“[Of the two new translations of The Little Golden Calf], Fisher holds the decisive edge.... Fisher's demarcation of signs from the rest of the narrative is especially appealing.”

“The translator's exuberance for the novel is apparent... and the much heftier Russian Life edition of the novel brims with notes, appendices, forwards, and prefaces.”

“Bravo for Anne O. Fisher for her wonderful annotated translation of Ilf’s and Petrov’s hilarious road novel, The Little Golden Calf. Students will find the rascally hero to be the ideal tour guide for travels in Stalin’s Russia. As a fictional character Ostap Bender begs comparison with the greatest Russian literary rebels, as well as with the bandits of folklore, pop fiction, and legend. Russian Life Books has done a very nice job of producing the volume, which will prove enormously useful in classes in Russian History and Literature.”

"Anne Fisher's versions of THE TWELVE CHAIRS (2011) and THE LITTLE GOLDEN CALF (2009) would seem to be the most academically accurate... her books trump the others easily for scholarship. Introductory essays, appendices of detailed footnotes, in CALF an extra appendix flagging some of the Ilf & Petrov phrases that entered everyday Russian speech, are rich and valuable sources of information and provide the widest possible context for a Western world reader." {Pelaphus / Amazon}

Ilya Arnoldovich Ilf (born Faynzilberg, 1897-1937) and Evgeny Petrovich Petrov (born Katayev, 1903-1942) were famous satirists and humorists. In the 1920s, they individually contributed many pieces to the humor newspaper Gudok. Their main co-authored works were the novels Twelve Chairs and The Little Golden Calf, and the non-fiction work One-Storied America. Ilf died of tuberculosis. Petrov died during the Second World War, while working as a war correspondent.

Anne O. Fisher first tried reading Ilf and Petrov’s Ostap Bender novels in 1995, as an undergraduate exchange student at Petrozavodsk State Pedagogical University, where patient friends spent many hours explaining the books to her. Ten years later, she defended her Ph.D. dissertation at the University of Michigan, on the novels’ reading and publishing history from 1928 to the present. She has also translated the coauthors’ account of their 1935-36 road trip through the U.S. (Ilf & Petrov’s American Road Trip, Cabinet Books and Princeton Architectural Press). She has received an NEH grant to work with Alexandra Ilf on a biography of her father, Ilya Ilf, and a translation of his diaries, as well as an NEA translation grant to support the translation from the Russian of The Joyous Science: The Selected Poetry of Maxim Amelin.

Introduction: Some words from Alexandra Ilf, daughter of author Ilya Ilf, about the novel’s history with Soviet power.

Foreword: Translator and Ilf and Petrov scholar Anne O. Fisher, Ph.D. offers important background on the history of this cultural touchstone, how it has played out in other books and media, and what the deal is with all the different versions.

From the authors: The hilarious original preface from Ilya Ilf and Evgeny Petrov.

Part One: In which we meet the resurrected Ostap Bender. He assembles his motley crew and sets his plans in motion. We also meet Alexander Koreyko, underground millionaire and swindler — a true match for Bender. The stage is set for a battle of titanic proportions. But first Bender and friends have to drive across western Russia, masquerading as part of a road rally.

Part Two: In which Bender begins his assault on Koreyko’s fortress, starts up the Horn and Hooves Bureau and unexpectedly falls in love.

Part Three: In which the novel reaches its climax, as the hero chases the anti-hero across Central Asia, fraternizes with enemy journalists and does battle with the elements en route to an unexpected ending.

Notes: Over 300 endnotes on the novel, annotating the important historic and literary allusions throughout the work.

Appendix 1: Ilf & Petrov’s Colorful Characters — a short discourse on the names the authors use to give their characters double meaning.

Appendix 2: Krylatiye frazy (Catchphrases) — some of the phrases and idioms from the book that have become integral parts of the Russian language.