The Good, the Bad, and the Middling

Alexander Mozhayev, who wrote an editorial for the Jan/Feb 2017 issue of Russian Life about Moscow’s monument-mania, takes us on a tour of ten distinctive monuments erected in the capital this century. The tour is a rather nice summary of the state of monumental art in Russia today.

In addition to all that was written about this monument in the Jan/Feb 2017 issue of Russian Life, it is worth adding the opinion of writer Andrei Baldin:

“It would be pointless to list all the errors of this new find. It is nothing but errors. To drag this iron fellow from the brow of Sparrow Hills, where he at least had some height from which to look down on things, is a wildly unprofessional error. Now it simply stands on the earth, which distorts the figure’s proportions: the legs are short and weak, the head is visually enlarged. The monument has been transformed into a chess piece, an iron queen, which seems to be standing on the board, reeling about without necessary support.”

The “chess board” effect noticeably flattens the location. The Borovitsky crossroads always had a mobile, unruly terrain. Now it has been calmed. The intersection has become flat and simple.

2. Monument to Patriarch Hermogenes of Moscow (2013)

Previously, Alexander Gardens seemed to be a finished space, with its institutionalized, imperial monuments. In 1996, the sculptor Zurab Tsereteli populated it with bronze fairy tale heroes. But the wave of over-sculpturization in the gardens began with this monument to the patriarch, who died during the Polish Intervention (Hermogenes was patriarch during the Time of Troubles). In 2015, a monument to Emperor Alexander I was added. Prince Vladimir, who stands across from the lower end of the park, caps these extremely pompous monuments by the sculptor Salavat Shcherbakov.

Before Shcherbakov received the status of Court Master, his works were less pompous and more tactful. It is rare to hear reproach for his monument to the engineer Shukhov, which successfully caps the end of Sretensky Boulevard, dead-ended in the Soviet era. The monument is equipped with small forms, wheels, people, and horses, which children and tourists seem to like.

If the monument to Shukhov is connected historically to its location (its hero lived a couple of blocks away), then the monument to Qunanbayuli on neighboring Chistoprudny Boulevard was something of a suprprise – ten years ago very few Muscovites even knew that this classic Kazakh poet existed. The singular reason for its appearance here is the neighboring embassy of Kazakhstan, which gifted the monument to Moscow. At the same time, Abai has a pleasant pedestal with a pair of Kazakh idols, which coincidentally remind us of Poganny (“Infernal”) Pond, which stood here some 300 years ago.

Another boulevard monument is that to the writer Sholokhov, on Gogol Boulevard. In the artist’s interpetation, Sholokhov is rowing a boat along the Don River, while behind him a herd of horses crosses the river. In the summer, on the side of the "hill," a fountain is turned on, to mimicking the (quietly) flowing Don. But when the fountain is turned off in the other seasons, the heads sticking out of the hill look rather more menacing. Muscovites have made their own adaptation to the monument during the winter, annually adding snow hares as boat passengers (analagous to the boatman who saved drowning hares in Nekrasov’s classic poem, Дедушка Мазай и Зайцы).

The newest work on this list has evoked all sorts of reactions, even from among those who are Plisetskaya's greatest fans. As noted in press accounts, the tall pedestal for the statue was her husband’s (Rodion Shchedrin) idea, as a way of avoiding “too much familiarity” on the part of tactless visitors. Yet theater critics have offered a logical flaw in the work: it is composed as if visitors are looking at the impressive statue of the dancer from the orchestral pit, giving it a rather strange silhouette. The monument’s sculptor, Viktor Mitroshin, said that he started out on the Plisetskaya monument by making a statuette of the artist as a prize for a competition. This explains the variance in texture between the body and dress, something characteristic of small souvenir statues, particularly those of Asian provenance.

The initiative for the creation of a mass, monumental complex came from the Russian Military Historical Society, which established Commanders’ Square (сквер Полководцев) on Krivokolenny Alley. And so this has become the site of a collection of hero statues that looks like something assembled at the bottom of a barrel: busts and full-length figures of varying sizes, on different pedestals, and a bear that has somehow wormed its way into their company. The combination of modern monuments with over-large statuettes reminds one of a souvenir counter in an open air market.

The most recent work by Master Tsereteli is this monument on Razgulyai Square to the People's Militia (“ополченцы”) in World War II . The soldier’s family is rather uncanonical: they are in strange outfits for that era, and the main figure wears a crucifix, instead of the more predictable Komsomol badge. It has been explained by its organizers that there were many true believers among Muscovites in those years who did not hide their crosses beneath their shirts. And the strangely ecstatic smile on the girl’s face has been explained by the fact that she is looking at the church which stands opposite. It was later learned that the statue is an exact copy of a figure on Tsereteli’s monument to the wives of the Decembrists, completed in 2008 (see below). In order to comport them with the order from the Council of Veterans, the workshop only had to change the icon into a photograph and then shorten the hemline of the girl’s dress. 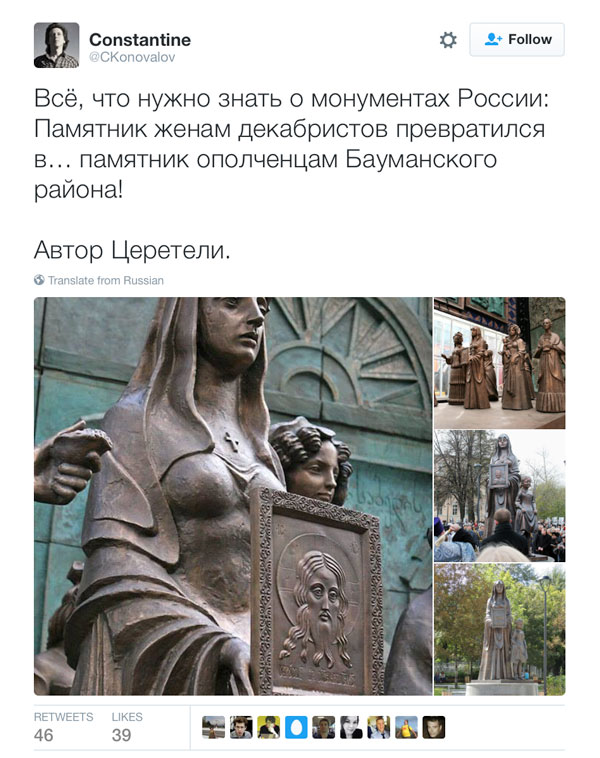 The narod’s favorite style of sculpture, one that comes down off its pedestals – so that one can be photographed with them, hug them and what not – was initiated with the monument to the clown Nikulin on Tsvetnoy Boulevard in 2000. One would suppose that а monument to the People’s Artist, front line soldier Yuri Nikulin, might deserve a bit of distance from viewerс, but a monument to a character, a lyrical hero, is another matter altogether. And now this difference has been further blurred: the ugly figure of the criminal nicknamed “Docent,” from the Soviet film Gentlemen of Fortune, (located on Mosfilm Street) has been officially dubbed a monument to Yevgeny Leonov, who played the character in the film. The statue was kidnapped and scrapped in 2015, then ceremoniously re-unveiled in 2016.

This is the must subtle, modest and, perhaps, the best monument in modern Moscow. It was unveiled in a square on Zabelina Street, beneath the windows of the apartment where the poet lived. The sculptors were Dmitry Shakhovsky and Yelena Munts, the architect was Alexander Brodsky.