As our tightly-packed Boeing 777 descended toward Moscow’s Sheremetevo Airport, it was engulfed in massive, downy white clouds that floated above a rich, green landscape peppered with red-roofed dachas. Everything clean and fresh, as if a cleansing rain had just passed through. The sun shimmered between breaks in the clouds, casting sharp shadows over the dacha settlements, darkening large sections of the wide, meandering Moscow River.

As we banked toward the airport, the needle of Ostankino Radio Tower emerged from a glistening, yellow haze off to our south. The skyscrapers of Moscow City were just coming into view when our 777 suddenly accelerated and lifted, aborting the landing. No explanation was shared over the intercom, and we circled around again for a second attempt, this time successful, leading to the obligatory round of passenger applause.

Moscow. Stage Two of the Children of 1917 project has begun.

During June and July, the team of Mordasov, Grebennikova and Mashchenko traveled around towns and villages near St. Petersburg, Pskov, Veliky Novgorod, Tver, and Nizhny Novgorod, testing our methodology and gathering the stories of a half-dozen Russian centenarians, while I watched jealously from afar, catching up via Facetime chats, transcripts and film captures, working to clear the decks in the “home office” for our longer, more intensive work in August.

August has arrived. Mikhail has been working assiduously to set up a month of interviews across Russia (and the former Russian empire) with remarkable centenarians. After a few days in Moscow, the next two weeks will take us south to Tarusa and Kolomna, then east aboard the Trans-Siberian Railway, with stops in Samara, Ufa, Novosibirsk, Krasnoyarsk and Irkutsk. It is a full and ambitious schedule, and the only certainty is that there will be changes and course alterations along the way (and that, being August, it will likely be fairly warm wherever we go).

Already our first planned meeting in Moscow did not come off, as our centenarian came down with a temperature and had no interest in spending time with accredited journalists.

So we circled around for a second landing attempt and the following morning headed north of the capital to Khimki, where we met Alexandra Vasilyevna Pilyasova, who turned 100 in May. Born in the town of Tirlyan, in Bashkiria, her life was marked early on by Stalin’s “dekulakization.” Someone denounced her family as kulaks, she tells us, not because they had a horse and a cow, but because they believed in educating boys and girls equally. Her father – who had served seven years in the tsarist army with distinction, fought against the Japanese and Germans, and been wounded, but who then later refused to fight for the Red (“I’m done with fighting”)  – was exiled to eastern Chelyabinsk oblast. Alexandra’s mother followed, but the children stayed behind with relatives in Tirlyan.

Alexandra endured the social outcasting of a “daughter of kulaks,” was denied the access to higher education she so desired, and began laboring in a metal-working factory at 17, self-educating and proving herself such a reliable worker that she later received an esteemed award for her labor that bore the profile of Stalin – the tyrant whose dekulakization policy eviscerated her family and denied her the education and future she desired and deserved.

I hold the medal in my hand and feel a weight far greater than its mass, then later stare at family photos from 1935, transfixed by the innocent, hopeful faces of Alexandra and her family, who had no way of knowing the trials and war that lay before them.

It is not your usual interview to sit down for several hours with someone who has lived 100 Russian years. First of all, it takes careful planning and diplomatic cajoling. Mikhail spends hours on the phone, surmounting considerable suspicion and doubt, convincing people he has never met to allow us to come into their homes, to upset their lives and furniture for photos and an interview (“Can we please move that beautiful family heirloom clock from the mantle? Its resonant ticking will be picked up by our microphones… Oh, and while you are in the kitchen, can you close all the windows on this hot day? And don’t forget to switch off your telephone too…”).

And yet Alexandra’s daughter Tatyana effervesces with hospitality, using the opportunity of a break in the action to fill us up on tea and cakes, homemade strawberry jam, and delicious pirozhki. Even the apartment’s cat, due to give birth any day, puts up with our intrusion, though it wants nothing more than to sit and be comforted by Alexander Vasilyevna, who brought her two felines with her to Moscow when she moved here from Tirlyan.

“What kind of senior discounts?” Tatyana replies when we ask if her centenarian mother received a special airfare for her stressful flight from Ufa to Moscow this spring.

“Discounts are not real life, they are just something that get announced. And imagine,” Tatyana says with a smile, “they charged us 4000 rubles for each cat.” 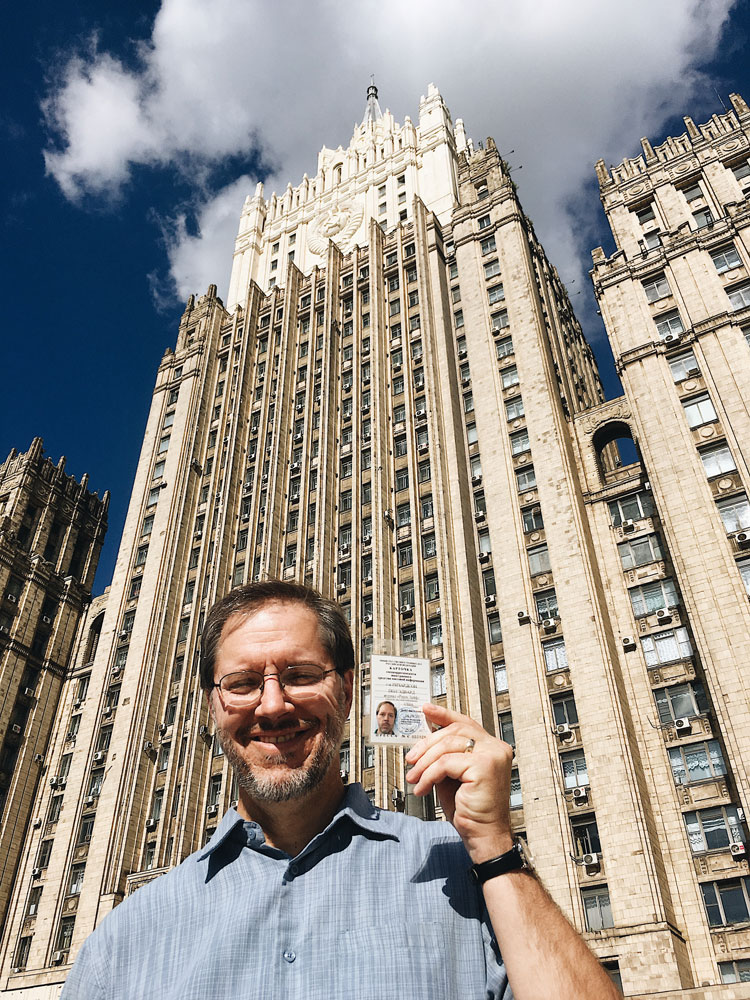 Readers familiar with the first Richardson-Mordasov saga, chronicled in Driving Down Russia's Spine, will remember the uncomfortable incident in Valdai and the ensuing run-in with the Migration Service regarding a certain foreign journalist's non-accreditation.

In order to avoid a repeat of this situation, this time around the team endured a multi-month accreditation process, and the desired, Ministry of Foreign Affairs document was officially acquired on August 1, in a not very ceremonious hand-off outside a very luxurious annex to the Ministry's main building.