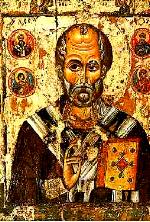 Whatever you call him, the Gift Giver of Christmas owes his existence and spirit of generosity to St. Nicholas, Bishop of Myra. Nicholas' Feast Day is December 6 and has been observed in Russia for centuries where St. Nicholas was once known as Father Christmas. St. Nicholas is, also, a Saint in the Roman Catholic Church. During the Soviet Era, the celebration of the Nativity of Christ was forbidden. But, the spirit of St. Nicholas endured in the person of Ded Moroz, Grandfather Frost.

The Russian Orthodox Church uses the Julian or old calendar, whereas most of the western world refers to the Gregorian calendar. The Julian places Christmas on January 7, on the Gregorian calendar; thus the Christmas season runs from January 7 until Theophany on January 19 (Gregorian). As a result of Martin Luther's reforms and the schism of the Catholic Church resulting in Protestantism (17th c.), the latter chose to not acknowledge St. Nicholas because of his close ties to the Church of Rome. Many non-church affiliated gift giver characters began to present themselves throughout Europe. Ded Moroz, or Grandfather Frost, came to Russia in the late 1800s, providing this country a counterpart to the Western, secular Santas.

Unlike the Western Santa Claus, Ded Moroz typically is a tall, slender gentleman with a long white beard. He would wear long, lavishly adorned robes of red and gold. Often, Ded Moroz would be depicted in a costume very similar to a bishop's clerical garb; red cossack, white lace surplice, long red cope with gold adornment and the tall, pointed Bishop's hat. During the Soviet Era, Ded Moroz's robes were usually a light blue. His home is a log house in the wooded village of Viliky Ustyug, Vologodskaya region in northern Russia about 500 miles northeast of Moscow. Ded Moroz travels, of course, in a troika; a decorated sleigh drawn by three horses. He is assisted by Snegurochka (the Snow Maiden) who, it is said, is Ded Moroz's granddaughter.

Another difference between Ded Moroz and the Western Santa is the way he delivers his gifts. Ded Moroz does not slide down a chimney nor does he land his sleigh on roof tops. Rather, he visits only good boys and girls, door to door. Like Santa, Ded Moroz will not visit homes where the children are awake; even if they have been good all year long. It is, also, a common practice to leave out food for Ded Moroz, just like Westerners set out cookies and milk for Santa.

Prior to Tsar Peter the Great, the Muscovy calendar placed the first day of the new year on September 1. Peter, in 1699, determined that New Year's Day should be on January 1 and further ordered that all households would sport festive lights and a seven day feast would commence.

Very popular during Sviatki was the practice of mumming. Mummers were, typically, young folk who would dress up in colorful and clown like costumes. They would race through the streets of their village in their troikas, visiting and entertaining neighbors and friends with song, dance and games. Mummers are see today throughout the world and are very prevalent in England, the American northeast and Canadian Atlantic Provinces.

Second only to Pascha (Easter) Sviatki was the most holy time of the year. It was, also, the gayest. Carols and folk songs, known as Kolyadki, were sung to herald Christ's Birth and the coming of a new year. Trees were decorated, gifts given and a great Christmas feast enjoyed by gatherings of family and friends.

During the years following the Bolshevik Revolution (1917) and the end of tsarist rule in Russia, Sviatki took on a different meaning and tradition. The Soviets sought to suppress and outlaw any and all forms of religious expression or celebration and either destroyed church buildings or converted them into public/governmental centers. Thus, the Nativity of Christ was replaced by an emphasis on the celebration of the winter solstice and new year. There remained, throughout the Soviet Era, groups of Russian Orthodox Christians who continued to celebrate and practice their faith and its holidays; but not without consequence.

Our Father among the Saints

Archbishop of Myra in Lycia

Epistle: Hebrews 13:17-21
13:17 Obey your leaders and submit to them; for they are keeping watch over your souls, as men who will have to give account. Let them do this joyfully, and not sadly, for that would be of no advantage to you.
13:18 Pray for us, for we are sure that we have a clear conscience, desiring to act honorably in all things.
13:19 I urge you the more earnestly to do this in order that I may be restored to you the sooner.
13:20 Now may the God of peace who brought again from the dead our Lord Jesus, the great shepherd of the sheep, by the blood of the eternal covenant,
13:21 equip you with everything good that you may do his will, working in you that which is pleasing in his sight, through Jesus Christ; to whom be glory for ever and ever. Amen.

Gospel: St. Luke 6:17-23
6:17 And he came down with them and stood on a level place, with a great crowd of his disciples and a great multitude of people from all Judea and Jerusalem and the seacoast of Tyre and Sidon, who came to hear him and to be healed of their diseases;
6:18 and those who were troubled with unclean spirits were cured.
6:19 And all the crowd sought to touch him, for power came forth from him and healed them all.
6:20 And he lifted up his eyes on his disciples, and said: "Blessed are you poor, for yours is the kingdom of God.
6:21 "Blessed are you that hunger now, for you shall be satisfied. "Blessed are you that weep now, for you shall laugh.
6:22 "Blessed are you when men hate you, and when they exclude you and revile you, and cast out your name as evil, on account of the Son of man!
6:23 Rejoice in that day, and leap for joy, for behold, your reward is great in heaven; for so their fathers did to the prophets.

Troparion; Tone 4
The truth of things revealed thee to thy flock as a rule of faith,/ a model of meekness, and a teacher of temperance./ Therefore thou hast won the heights by humility,/ riches by poverty./ Holy Father Nicholas, intercede with Christ our God that our souls may be saved.

Kontakion; Tone 3
Thou wast a faithful minister of God in Myra,/ O Saint Nicholas./ For having fulfilled the Gospel of Christ,/ thou didst die for the people and save the innocent./ Therefore thou wast sanctified as a great initiator of the grace of God.