On the eve of the Orthodox Feast, the Dormition of the Most Holy Theotokos (Aug. 14, 2000), the Russian Orthodox Church officially decided to canonize (glorify) Tsar Nicholas II, his wife Alexandra and their five children. This debate began over 80 years ago after the family's brutal execution at the hands of the Bolsheviks. A little over two years prior, the Tsar, Alexandra and three of their five children were finally buried in the Tsar's Tomb at Sts. Peter and Paul in St. Petersburg.

The vote, taken by the Council of Bishops during their meeting for canonization was unanimous. Most of the 853 individuals the Council canonized in the 20th century were martyrs who died at the hands of the Soviets.

Patriarch of Moscow and All Russia, Alexei II, and roughly 150 bishops debated, once and for all, the issue of the Tsar's spiritual life and qualifications for sainthood. Supporters of this action had long insisted that the Tsar was anointed by God and was incapable of stopping the communist takeover of Russia. Those who opposed the Tsar's canonization insisted that he was weak, indulged in excesses and had little concern for the suffering of his people.

The Russian Orthodox Church Outside of Russia (ROCOR), a group which broke away from Moscow during the Soviet regime, had long since canonized the Romanovs. This was a major sticking point in any efforts to re-unify the Church. Many miracles attributed to Nicholas II, such as icons weeping myrrh, have been reported over the years from inside Russia. The decision to canonize the Romanovs was based on their acceptance of death with Christian humility. The Romanovs were canonized as holy passion bearers, the lowest form of sainthood in the Russian Orthodox Church. 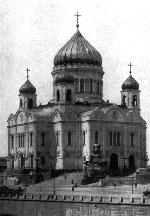 The Romanovs, along with 1,100 others, were officially canonized on August 20, 2000, during the Liturgy at the newly consecrated Christ the Savior Cathedral in Moscow. The consecration of the cathedral was on August 19. This is the date of the feast of the Transfiguration of Our Lord.

Christ the Savior, taking 43 years to build, was completed in 1883 and stood as a testament to Russia's defeat of Napoleon in 1812. On December 25, 1812, the day that Napoleon's troops were completely driven out of Russia, Alexander I issued and edict to build a great cathedral in Moscow. Christ the Savior was chosen as the name in honor of the Savior's redemption of Russia and the threat of French occupation.

The first cornerstone was put in place on October 12, 1817. However, the location on Sparrow Hills was soon determined to be unsuitable. Nicholas I selected a new construction site on the banks of the Moscow River, near the Kremlin, on April 10, 1832. Russia's best architects were involved in the design, construction and decorating of the cathedral. Their creation was finally consecrated on May 26, 1883, the same day Tsar Alexander III was coronated. The cathedral quickly became a center of faith, education and humanitarian endeavors.

On December 5, 1931, the Cathedral was destroyed by Josef Stalin. It seems that it was Stalin's desire to build a new holy structure, the Palace of Soviets. Instead of a cross, this building was to be topped with a statue of Lenin. But, the project was never realized. During Khruschev's regime (1958 to 1964), the gaping hole left by the cathedral was replaced with an outdoor heated swimming pool.

After the fall of the Soviet regime in 1991, renewed interest in the old Cathedral began to slowly arise. Reconstruction of Christ the Savior began in 1994 with the destruction of the swimming pool in the fall. Patriarch Alexei II blessed the cornerstone on Christmas, January 7, 1995. The following Christmas, the donor plaques are blessed and unveiled and the Patriarch, President Yeltsin and Mayor Luzhkov placed the last bricks in the entrance wall.

The final product, on the original Volkhonka Street location, is a glorious reproduction of the original architecture and stands, again, as a testament to the Russian soul and ability to rise from adversity.

The Cathedral complex includes two sections. The first is the marble Cathedral itself. The second is the huge granite base upon which it sits. The Church of the Transfiguration and a museum of sacred art are housed here. On the southern side of the base is the Hall of Church Councils which can seat up to 1,200 and a kitchen large enough to feed 1,500 people.

The Church's Council of Bishops wrote, "The reconstruction of the Christ the Savior Cathedral became a miracle, symbolizing the transfiguration and revival of our people."

1974
Soviet ballet dancer Mikhail Baryshnikov defected to the west while touring Canada with the Bolshoi Ballet.

RuNet: The Silly and the Serious