Vodka gets its fair share of PR as far as Russia is concerned. But is it always for the right reasons? October 24 marks the birth of Venedikt Erofeev, at least as well known for his drinking and vagrancy as for his writing.

His famous “poema” (more a novella, really) is Moscow-Petushki, though it’s usually translated as Moscow to the End of the Line. The narrator – Venichka, a version of the author Venedikt– recounts his attempt to travel by train from the capital to the peripheral village of Petushki. His journey is populated by drunkards, philosophers, angels whispering in his ear, and other fellow travelers who partake in his inebriated path to Petushki.

So through Venichka’s intoxicating lens, here are three little facts on alcohol consumption in Russia today. True, his lens tends to skim over some of the more dire sociopolitical aspects of heavy drinking, so consider yourself warned. But literature is all about opening up the imagination, even if that means the occasional satirical poke at social problems, isn’t that so?

1. The Russian government, through multiple actual governments, has made many an attempt to combat alcohol consumption, including (according to The Atlantic) four reforms before the revolution of 1917, and larger anti-alcohol campaigns in 1958, 1972, and 1985. But each attempt culminated with just as much drunkenness and addiction – often because of moonshine or “samogon,” which translates literally, if a bit awkwardly, to “self-made fire.”

Venichka’s answer: creative recipes like “Tear of the Komsomol girl” or “The Spirit of Geneva,” which build a buzz with substances you wouldn’t have considered drinkable. Here, for example, is “Balsam of Canaan”:

Thirsty yet? As Venichka quips, “Life is given to a man only one time and it must be lived so as not to make mistakes in recipes.”

2. When addiction’s on the line, there’s always cold turkey – and that’s exactly what the village of Tumul did with its self-imposed ban on the selling and drinking of alcohol. Taken up in 2012, the ban has allegedly led to declining rates of illness and crime, and suggesting that many a missed workday prior to 2012 was alcohol-induced.

Venichka-the-narrator may like to take a tipple, but he doesn’t see that as compromising his approach to labor. While working as foreman at a cable-fitting site, he institutes a new system of individualized charts to mark his colleague’s progress – that progress being in alcohol consumed rather than cable-fitting. These charts, he boasts (and illustrates in the book), “looked variously like the Himalayas, the Tyrol, oil derricks, or even the Kremlin wall…”

A more dedicated worker would be hard to come by.

3. If anyone can bring out the artistry of alcoholism, it’s surely Erofeev. But before we get too tipsy on his text, let’s come right out and say it: alcoholism in Russia is not a pretty thing. Just ask the World Health Organization, whose research shows that one in five Russian men die due to alcohol-related causes, compared with 6.2 percent of all men globally.

To be fair, Venichka isn’t blind to the dangers of drinking. Near the end of his text, his narration is getting increasingly colored by hallucination, and we find him dozing on the platform of what he believes to be Petushki (but is it? We won’t give it away). His drunkenness, weakness, and the touch of a hangover blend with a dream:

“From far off, over there where the fog swirled, those two lanky figures from Mukhina’s huge sculpture emerged, the worker with his hammer and the peasant woman with her sickle, and they came right up to me, both with smirks on their faces. And the worker hit me on the head with his hammer and then the peasant woman gave it to me in the balls with her sickle.” 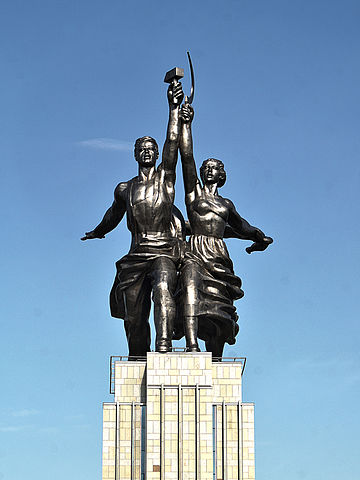 Yes, that’s that famous and very dignified-looking Mosfilm statue, brought to life in Venichka’s hallucination to play the disciplinary role of properly ideological Soviet folk. If alcohol poisoning, cirrhosis, and suicide are the punishments for less artsy alcoholics, getting beaten to a pulp by a X-foot statue surely isn’t the worst that can happen.

It may seem like Erofeev is making fun of a truly serious and often devastating plight, one that has affected the lives and caused the deaths of many Russians. But in his strange, wry, and occasionally deeply philosophical way, Erofeev was lamenting the tendency to turn to alcohol when life had little else to offer. He died in 1990 of throat cancer, and though his story can be taken as a warning against the heavy drinking and smoking, his writing should be appreciated for its artistic spirit, and not just for the spirits imbibed within it.