Roskomnadzor said the publications have published “inaccurate, socially significant information that does not correspond to reality” about the shelling of Ukrainian cities by Russian troops and the death of civilians in Ukraine, as well as “materials in which the ongoing operation is called an attack, an invasion, or a declaration of war.”

Roskomnadzor objects to the Russian "special military action" being called an attack, an invasion, or a declaration of war, all three of which are the most accurate descriptions of the reality we see unfolding. 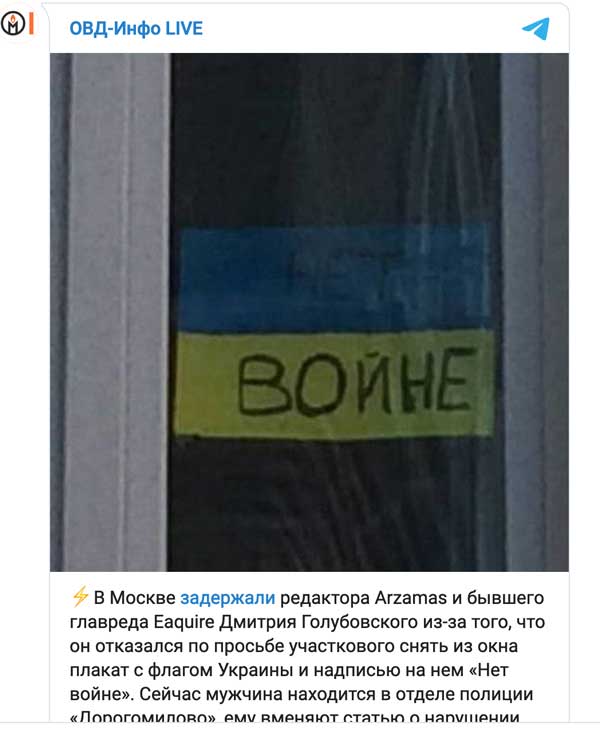 Meanwhile, Arzamas editor Dmitry Golubovsky has been detained for refusing to remove a poster from his apartment window – a blue and yellow flag of Ukraine that said simply, "No to War."

On February 25, the day after the start of the war, Russian teachers published a petition in which they openly supported the anti-war protests and demanded a ceasefire. At the time of this posts' publication, it had been signed by more than 1,300 teachers from 65 regions of Russia, as well as from other countries.

Said one teacher, in an interview with Meduza, "Of course, I'm afraid to express my protest. But considering the hell is going on in Kyiv right now - literally a day's drive away - it's just shameful to complain about one's own fear."

More than two thousand artists, art historians, architects, producers, curators, musicians, and other cultural figures have signed an open letter against the war with Ukraine. Hundreds of doctors have signed their own letter.

A petition to stop the war has been created on change.org and as of the time of this post it had 700,000 signatures.

The UN General Secretary estimates that over 100,000 Ukrainians have been forced to flee their homes because of the Russian invasion.