The Most Beautiful Village in Russia

Last week tiny Kinerma was named as this year's "most beautiful Russian village." As it turns out, Kinerma was a stop on The Spine of Russia project and has a chapter all to itself in the forthcoming book, Driving Down Russia's Spine.

Across the room an iPhone alarm rages.

I open my eyes. Or at least I think I do.

I cannot tell if I am asleep or awake, alive or dead.

An utterly absolute blackness surrounds me. Eyelids closed: pitch black. Eyelids open: pitch black. It is a very unsettling feeling, as if I could reach out and touch infinity, which I have no intention of doing.

Apparently (I later learn), the photographer I am traveling with decided to get up to shoot the stars just before dawn. He then thought better of it, shut off his alarm, and crawled back into bed.

I realize it is the middle of the night, yet it takes me a few moments to get my bearings. Gradually I remember that we are sleeping alongside a massive Russian stove in a century-old wooden house, which happens to be located about an hour’s drive west of Petrozavodsk and 60 kilometers off the E105.

We are in rural Karelia, in the tiny village of Kinerma, population 5.

Four of those five are the Kalmykov family.

Nadezhda Kalmykova, 48, says as a teen she would do all she could to avoid coming here. Her mother had been born in the village and the family would come back to Kinerma for vacations and weekends. And it was all work, something as a teen she obviously wanted to avoid.

But people change. Kalmykova changed. About 15 years ago, when she told someone she was from Petrozavodsk, they didn’t believe her. “You are always talking about ‘Kinerma, Kinerma,’” she recalls them saying. She soon realized that her future lay in the preservation of this tiny village. 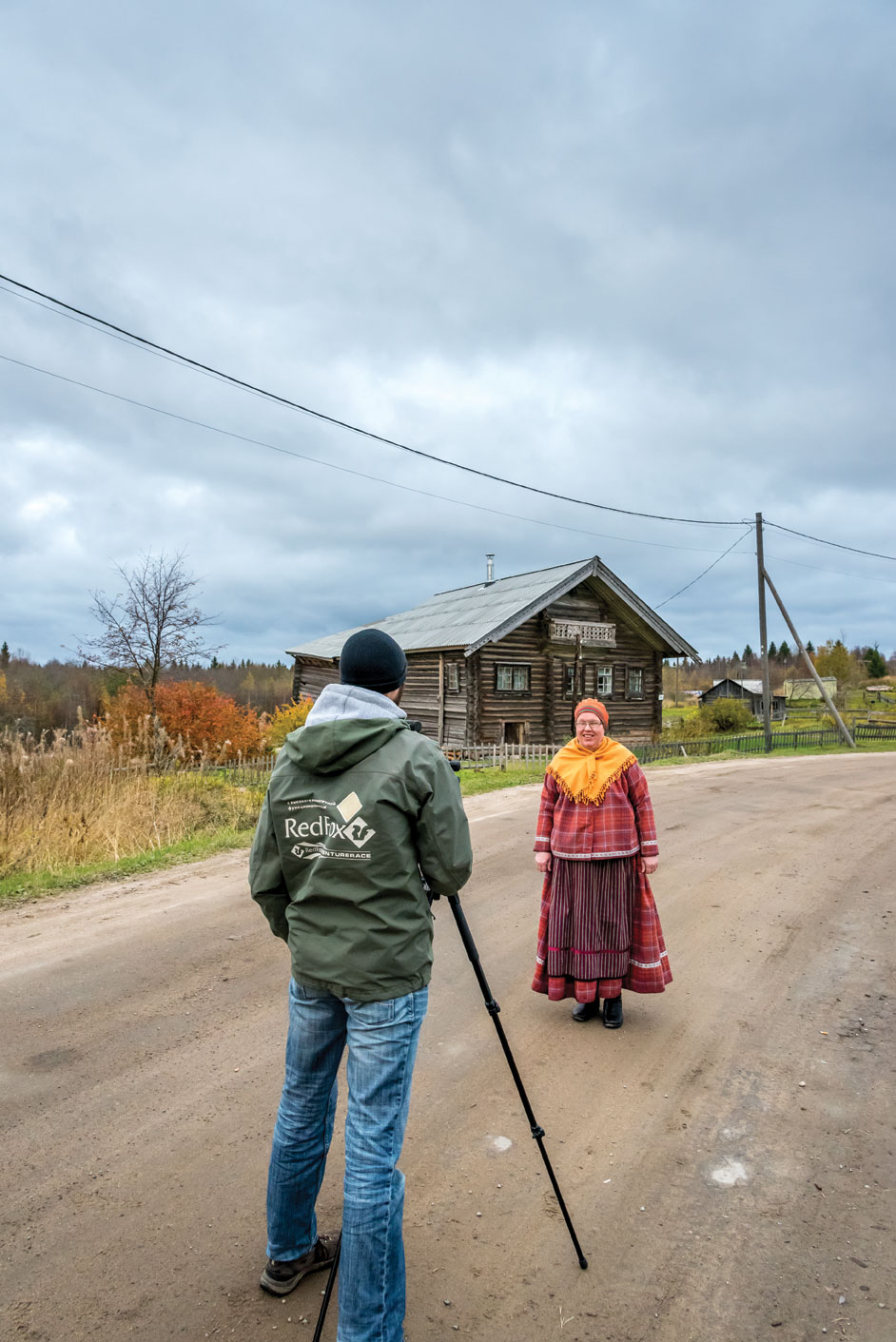 In fact, Kinerma is the last extant Karelian village preserved in largely the state it was in 150 years ago. It has been saved by several historical flukes, but mainly because it does not sit on a lake or near a river, meaning it was never a highly desirable location for summer dachas. Also, Kinerma was home to “the only miracle-working icon in the Olonets region,” Kalmykova says. “I am sure that is what has really protected us.”

The village is arranged in a circle about its old, wooden chapel, which nestles in a tall pine copse, its grounds humpy and uneven from unmarked graves. The village has 11 buildings in various states of repair that either belong to those who live in them, or are kept in a family and passed on to descendants. Yet, unlike most Russian villages you come across in the North, only a few of the buildings are in dire condition. “People have started coming here from all over the world,” Kalmykova explains, “and many heirs are living here all summer, and they have already started taking better care of their homes and yards. The village is being transformed.”

Each August there are celebrations in the village on the annual name day for the church’s famous icon, and there is a steady flow of tourists who come by minibus from Petrozavodsk, as part of tours that include the architectural sanctuary on Kizhi Island. Finnish organizations also provide valuable in-kind support.

The 120-year old Karelian house we are staying in has been retrofitted to hold up to 14 visitors, which it often does, with Kalmykova cooking and cleaning and giving guided tours (along with her husband and young sons).

“What makes a building Karelian is that the livestock and people lived together under one roof,” Kalmykova explains. “You had the warm, heated side, where the people lived, and the cold side where the livestock lived. Above the livestock was the feed storage, with natural aeration to keep the feed dry… They were built this way because of the weather, so that you could survive for several days without having to go outside, as long as you had a supply of water.”

In this building, where the feed loft would have been, Kalmykova has built a small, tastefully outfitted, trilingual museum to convey the history of the town and of Karelian architecture and life.

Meanwhile, at the center of the building’s warm side is a massive Russian stove. Two, actually – one for the main room, which is both living room and kitchen, the other for the bedroom where we slept. The stove takes a day or more to stoke and get up to proper temperature. A few quarter-split logs are burned in a carefully controlled manner, so as to heat up the huge mass of masonry. Then the flues are sealed off and the stone maintains and emits its heat for hours, days even.

Why did she decide to do this? “The main reason, of course, is to preserve Kinerma,” she says. “It is always on my mind...”

In the afternoon, Mikhail convinced Kalmykova to have her sons stoke up the communal banya, so that we could “enjoy” a post-prandial steam.

That evening, after a tasty dinner of locally caught trout, potatoes and carrot salad (and a couple of shots of vodka to get us in the right frame of mind), we stumbled down the hill through the gathering darkness to the “black banya.” I am told it is called a black banya because it has no chimney, so that heating up the main room with a wood fire blackens the interior of the building.

Later, after we are forced to retreat from the heated space until it can air out a bit, I decide the real reason it is called black is because this heating technique creates a huge quantity of carbon monoxide gas that can bring your life to a swift end. As in turning out all the lights.

We strip down to our birthday suits and proceed to sweat all the toxicity from the first week of our travels out through our pores. I am lashed with veniki (birch branches bound together into a bunch) to within an inch of my life, and then we rinse and wash in the hot, damp heat before stepping out buck naked into the blackened night – woozy in our carbon-monoxide, heat-stroke induced state – to marvel at the stars packing the Kinerma sky from one horizon to the other.

It is apparently in this lowered state of mental awareness that Mikhail decides to set his alarm to ring at an hour when, in reality, he has no intention of doing anything other than going back to bed.

This coffee table book is the photographic journal of an epic 6000-kilometer road trip. The book includes over 200 compelling images of Russians and Russian places met along the way, plus a dozen texts (in both English and Russian) on everything from business to education, from roads to fools.

1895
Lenin arrested; will spend 4 years in prison and Siberian exile, in the Yenisey district, where he will meet and marry his wife, Nadezhda Krupskaya.

Where the Russians Are