Ekaterina is an artist who is constantly sketching in St. Petersburg bars. Her hobby led to the creation of the Instagram blog “Between the Bars,” where she captures the city's bohemian atmosphere (and also sketches capybaras).

Ekaterina, tell us your story.

My family moved to Admiralteysky District when I was 3 years old, and I still live here. First of all, this is my neighborhood, which I know well and love. Second, I like it because it is central, yet at the same time a bit far away from the touristy center. If you go deep into Kolomna [a section of Admiralteysky District], you’ll discover a specific world with its own laws, people and atmosphere.

Both my parents are artists, so I began to draw as a young child. I graduated from the St. Petersburg Academy of Arts, where I studied architecture for six years. I didn’t become an architect, but I am a freelance artist and illustrator.

You’ve created several sets of postcards depicting St. Petersburg cafés and bars. If you needed to explain our city to someone who has never been here, what would draw on three imaginary postcards?

Of course my first choice would be Peter and Paul Fortress and the Neva River. The second image would show numerous rivers and canals, as our city is called the "Venice of the North.” And third would be an iconic St. Petersburg courtyard: dark and shabby.

Which are your favorite places in the city?

I have my favorite walking and cycling routes. In the summer I like to ride my bike to Tavrichesky Garden, through Palace Square, along the Moika River embankment or Milionnaya Street, then across the Field of Mars, passing Stieglitz Academy of Art and Design and Tchaikovskovo Street. The garden itself is a good place for cycling.

I like to walk in Kolomna, starting in Kulibin Square (I like its square shape and house with two little towers), I will stroll along the Pryazhka River or the alley near St. Nicholas Naval Cathedral. I like to sit there on a bench, observe dogs (I love dogs, but unfortunately am allergic) or marginal characters. In my free time I work on an illustrated map of Kolomna, showing is most important places. But it goes slowly, as it’s hard to make choices, so I continue to explore the area and think about what I should include. I wish I had an investor for this project!

As for drinking spots, I like Garage Bar. If I plan to meet friends near my house, I always try to make that the place we get together. They hold musical evenings on Fridays and Saturdays (no surprise, as its just three minutes walk from the Mariinsky Theater and St. Petersburg Conservatory). Musicians come and play the piano, sometimes the violin – anything from jazz to modern music.

Quite often I will visit Khroniki Bar, as it’s a convenient and popular place among my friends. I personally like Terminal Bar, as it was one of the first in the city with such a friendly atmosphere. They opened nine years ago on Rubinstein Street and later moved to Belinskovo Street. They have this huge window, and, in general, I adore places with large glass windows.

For foreign visitors I would recommend any place that offers “nastoykas” – home-made liqueurs that are typically Russian. There is the quite new Petrov-Vodkin Restaurant, where I’ve tried anise and cranberry nastoykas. If anyone orders borscht there, then when it is served the waiters start screaming loudly: “Borscht! Borscht!” Also, the interior has a copy of Bathing of a Red Horse, probably the most famous Petrov-Vodkin masterpiece.

Get Thee to Kolomna

If you want to see the majestic, historic side of St. Petersburg, yet experience an area where people actually live, you should head to Kolomna.

After you finish strolling St. Petersburg's Nevsky Prospect, you'll want to visit these five must-stroll streets in the Northern Palmyra, to get a feel for the rest of the city.

Ekaterina loves to sketch capybaras. Find out more about this unusual animal here. 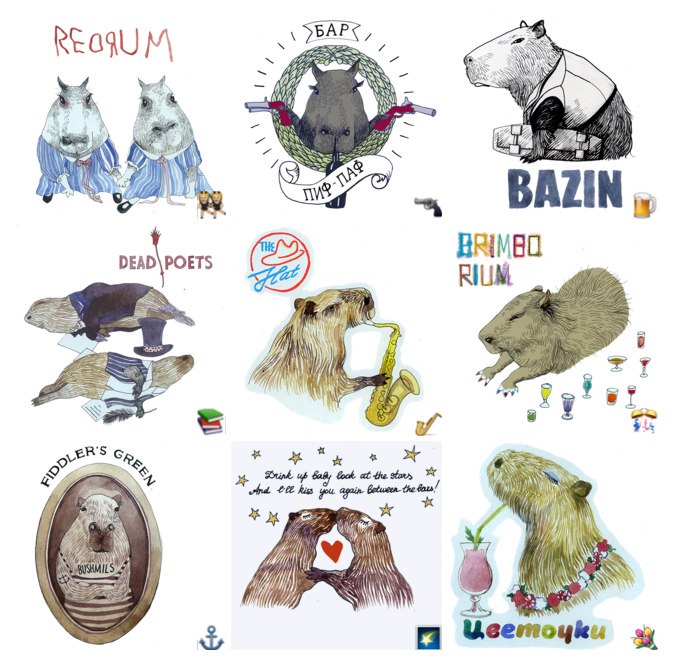