Under Stalin, a poem could mean life or death. For many poets, it was a one-way ticket to the Gulag. Today, poems can be a means to face cultural memories of arrests in the night, forced labor, and the silence demanded of people fearing those fates.

Whether struggling with the memory of terror or trying to make sense of the paradoxes of the Russian national character, these poems deserve a second glance today. Especially as whispers of cultural repression gain in volume, such works serve as a reminder of the pain of the past, but also demonstrate the complexity of Russia and its people. This is not a place that can be summed up by the Gulag, snow, and vodka alone.

For one, these are people who find the will to live through poetry. In the gloom of the Gulag, prisoners struggled for survival by reciting verse to each other, and poets committed their own creations to memory. Paper could be dangerous, if it could be obtained at all. Lev Ozerov illustrates that in his portrait of Shmuel Halkin:

There was no paper,
but Halkin was writing.
Poems piled up.
A terrible burden.
More dangerous, perhaps, than gunpowder.
He wrote them down
on the paper of memory
and day by day
his memory grew heavier.
Poems with sharp elbows
were elbowing one another
out of the way.

The poems seem to come to life inside of Halkin’s mind, tangling with each other like prisoners in an overcrowded barrack, heavier than forced labor. Surviving the elbows, Halkin lived to experience freedom:

When Halkin returned home,
worn out by the camps,
he wrote down his poems
and his memory emptied
and new poems
came flooding in.

Ozerov captures the sense of relief from a burden, and shows the complexity of capturing memory in art: in one draft of his poem, Ozerov included the final lines “Poems poured in, like memories of the future” (И хлынули в нее / Стихотворенья, как воспоминанья / О будущем).* With those words, Ozerov transforms memory itself: from a storage bin for heavy, elbowing poems, it becomes a path toward opening the future to new creation. Why he chose to excise these words in the final draft, the one used for this translation, is lost to the past. Yet even without them, the poem conveys the power of words to keep one’s mind alive when the body is imprisoned.

Halkin’s silence was a result of his imprisonment; in times with lower prison populations, silence was enforced through censorship. Censors were easily demonized by writers who wanted their art untouched, but David Samoilov shows the dilemma of the censor – in his poem, a German one, though one easily imagines parallels in the Russian context.

Words he’d blotted and excised
would come and torment him at night,
and, like some eerie circus,
would parade there before his eyes…

The next morning he took up, with zeal,
his… No – a different task:
he underlined all that was real
and crossed out everything else.
Poor censor, he’d lost his mind!
Little man, like a grain of millet!
He informed on himself in a day
and was taken away that minute…

With internet censorship in Russia reaching new highs (with Wikipedia, Reddit, and scientific research papers taking a hit, albeit temporarily), a censor who has to lose his mind to acknowledge what is real seems eerily familiar.

To avoid being censored – or arrested – a poet simply had to wait. Like Halkin, Anna Akhmatova (who first gained stature during the Silver Age) was aware of the possible price of a misplaced piece of paper. She wrote Requiem, her famed cycle about Stalin’s Terror, in the late 1930s and early ‘40s, but only wrote it down much later.

While women also faced the Gulag, Akhmatova’s focus was on women who waited at the Leningrad prison for news of arrested family members – as Akhmatova did for her son. These poems address personal pain, loneliness, the space of the prison, the torment of waiting. And the final piece addresses the torment of waiting for a more distant future: one in which the Terror can be discussed openly:

And if ever in this country of mine
they should decide to put up a statue
to me, then I will accept this honour
on one condition: that it be placed
[…] here, where I stood for three hundred hours
and they never drew back the bolts:
because I fear that, in the bliss of death,
I may forget the rumble of Black Marias,
forget how they slammed that vile door
and a woman howled like a wounded beast.

The fear of forgetting a painful past, Akhmatova seems to say, is more frightening than reliving it.

But even as we appreciate works that capture memories of suffering, it’s important not to let those images stand in for Russia as a whole. Conversations about Russia often center on political strife and oppression, with culture painted as the force of truth. Heroes like Dostoyevsky and Solzhenitsyn and martyrs like Mandelstam become noble embodiments of the Russian soul, contrasting its corrupt, soulless leaders. Not everyone gets trapped in the binary, but this view often plays too heavy a role in popular Western notions of Russia.

Particularly today, when censorship is on the rise and artists, bloggers, and Wiki editors struggle to express ideas that run counter to official positions, it is important not to simplify views of the Soviet past. The poetry of a country’s darkest eras show how it can become possible to forge ahead by fostering creativity. Art can allow the pains of the past to make way for the possibility of viewing a future that may not be untouched by trauma, but has learned to grow stronger from its memory. 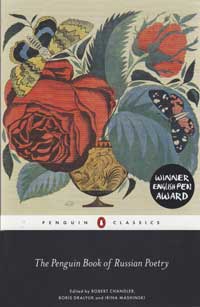 What can we learn about Russia, now and throughout history, from its poetry? This month we try to find out, with help from  The Penguin Book of Russian Poetry (released later this month), as reviewed in the November/December issue of Russian Life, and Russian Silver Age Poetry: Texts and Contexts, released earlier this year with Academic Studies Press.

* The article “Pure Poetry, And Then Some” in the November-December issue of Russian Life attributes the absence of these lines to a translator’s error; the translator in fact was working with the final edition of the Russian poem, while the author had access to a different draft.