How long have you been doing photography? Six years.

What style or genre most interests you? Documentary photography and sports.

Can you give us a short description of your city? Where is it located? What is it famous for? Ufa is the capital of the Republic of Bashkortostan. It is situated on the banks of the Belaya (White) River and is one of Russia's largest cities in terms of area of land covered. During the time of the Mongol occupation, their largest city was located here, Bashgirdt. A fortress was built in 1574, and in 1586 Ufa was officially given the status of city.

What are some things that only locals would know about the city? Ufa is the union of sky and water. The main reason to come here is not for cultural sites, but more for the authentic atmosphere. The monument to Salavat Yulaev [a Bashkir national hero] is placed on a high spot over the Bely River and it offers a truly regal view, with forest stretching to the horizon.

Old Ufa is small and compact. Rare wooden homes live alongside massive palaces that once belonged to rich forest merchants.

Which places or sites are a must for someone to see if they visit your city? You must visit the House Museum of the writer Sergei Aksakov, and you should walk down Lenin Street to the Children's Palace named for VM. Komarov, where Rudolph Nuryeyev took his first dance classes.

There is a unique atmosphere to be sampled in the now marginal region known as Chernikovka (it's name has been officially changed, but locals still call it this). It maintains the triumphal spirit of the post-war era – in the faces of the homes, for example, in the Pobeda movie theater. There is also some very expressive architecture in the Museum of Military Glory, built by Dmitry Vinkelman in 1998, and comprised of a harmonious collection of prisms, cubes and smooth cylinders.

Anything else? You should definitely take a tour to Shulgan Tash Nature Preserve, home to some of the oldest caves of human habitation, to see the wall drawings made 15-16 thousand years ago, including over 50 images of mammoths, horses, rhinos, bisons, and geometric symbols. Most of the images were made with red ochre. It is one of the greatest mysteries of the art world. For such drawings have often been found in France and Spain, but it was entirely unexpected to find them in Russia. 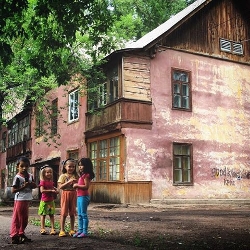 Construction workers repair a building in center of Ufa. 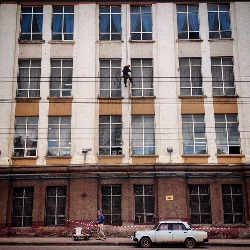 The Lenin square is located in the center of the city, in front of the building of the City Administration. All major events take place here - the New Year celebration, The Victory Day, all main concerts. Every day hundreds of people come here to spend time. 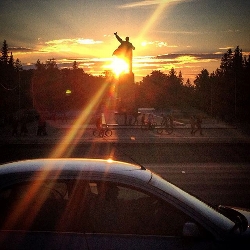 Ufa develops very actively. There are a lot of new buildings, hotels and modern districts, but still you can find ancient houses and buildings in the city center. 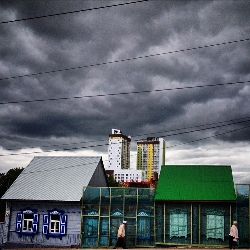 A girl reads a book in her mother's small sewing workshop, situated on the outskirts of Ufa. 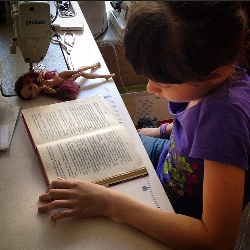 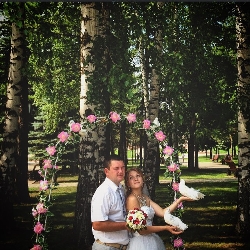 Parley with a Gangster