So you, dear readers, think that the Olympics is all about sports? Nay!

It is of course all about the souvenirs! And about how a miserly correspondent is supposed to buy them in sufficient quantity for the many friends and family left behind on the "mainland" while he is "roughing it" in Sochi...

It boils down to this: You need plenty of "Vitamin D" here in Sochi (money, in Russian, is dengi).

Of course, before thinking about souvenirs, one has to satisfy one's stomach. And, in case anyone is interested, the official per diem for this humble TV journalist is R700 (to cover lunch and dinner; a sumptuous breakfast is provided at the hotel, khalyava = free). So I found my comfort zone with a R250 option called kompleksny obed – a schi (cabbage) soup, a salad carrots and sauce and mashed potatoes with a solitary sausage. It's OK with beer, as say they.

Then this master of khalyava gets his freebie desserts at a nice corner called Kuban Hospitality (courtesy of governor Alexander Grachev) where they offer you free (the list is long) – tea, honey, baranki (small bagels), biscuits and pryaniki. Who needs the cinamon-rich apple pie at the Main Media Center's McDonald's? 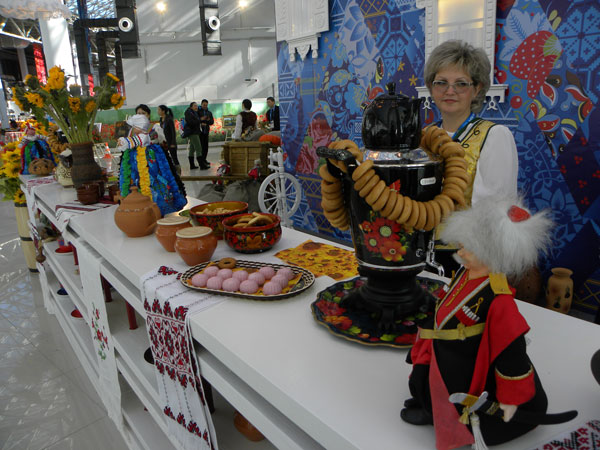 Time to visit the Kuban!

So with this strategy, I figure, I can save up some kopeks for souvenirs... Until I look at the prices: the T-shirt I bought for a friend was R1800 (over $50). The winter scarf for my younger son – R2200. Initially I was quoted R1100, but when I took out my wallet at the kassa, the devushka whispered – 'Izvinite, ya vas obmanula' (“Sorry, I cheated you.”) Though she is a volunteer, her mistake was involuntarily, so I went ahead with the purchase.

Needless to say, I have only scratched the surface with the requisite souvenir purchases.

“Gli olimpici souvenir sono molto cari,” I complained to my breakfast mate Enrico, who hails from Lugano. “Don't worry, it's like that at all Olympics,” he says with a smile, as if that were a consolation... 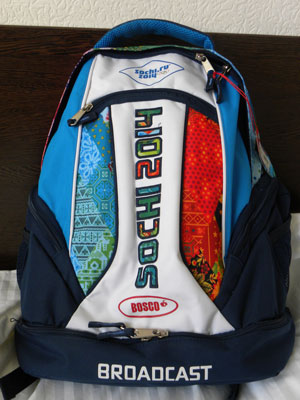 ​Luckily, I don't need any souvenirs for myself. The organizers gave me, as an accredited journalist, a voluminous back pack with a notepad and pen (of course all sporting the games' logo). Well, the colors are bit girly for my taste. But that's the design ordered up by the uniform official supplier Bosco. The T-shirts, the bags, the snowsuit of the volunteers working in the Mountain Cluster all have those somewhat funky rainbow colors. (That's famed movie director Nikita Mikhalkov wearing the Olympic colors there at the top of the page, by the way.)

When Putin was meeting with people on the eve of the Sochi games, one lady asked him, "Why did we pass that anti-gay law if we are dressing up our volunteers in these rainbow colors?"

“You ask me because you think I was behind the color choice?!” Putin retorted.

Ahah! At Rosa-Hutor village I find a terrific set of vodka glasses for just R350 ($10) – 6 nice ryumki with biathlon, ski, hockey, figure skating and other figures of winter athletes on them. Not only a bargain, but Bosco-free! And then some beautiful kitchen towels with images of the three Olympic mascots: a snow leopard, a white bear and a hare. 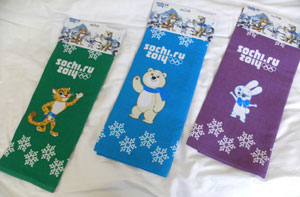 These three were elected by popular vote under our democratic former president Medvedev. It's a bit messy, that democracy thing... Medvedev clearly thought people might get the wrong idea if the symbol was just his namesake “medved” (“bear”), so he encouraged our narod to add a bars (snow leopard) and a zayats (hare). The good news is that each towel is just R15. One towel is for my wife, but I guess I won't get away with bringing her just a $3 gift from Sochi.

Oh, speaking of gifts... When the famous gymnast – Olympic champion Alina Kabaeva, who is Putin's rumored flame – was handed the Olympic torch on Friday night, your favorite khalyava-ist quipped to his TV friends, quoting a popular jewelry ad, “A shto ty sdelal dlya svoey devushki?” (“And what have you done for your girlfriend?”). I don't think the resulting laughter was nervous, but genuine.

Clearly more than a $3 dish towel. And for a moment there, we thought it was Kabaeva who had been tapped to light the Olympic cauldron. But no... niceties were observed. She was just one of the torch carriers, along with Karelin and Sharapova, etc. The cauldron was actually lit by two triple Olympic medalists (and sports legends – hockey goalie Tretyak and figure skater Rodnina).

A nice, balanced approach, Volodya and kudos for the suspense!

Now, about that Vitamin D...

Soviet Terror of the Skies: Marina Raskova and the Night Witches