Ivan the Terrible, Tsar of All Russias

On this day, 450 years ago, Tsar Ivan IV, commonly known as Ivan the Terrible, notified his boyars of his abdication. They convinced him to stay by offering him absolute power. Five years and five days later, he turned that power against Novgorod.

Ivan the Terrible could sometimes be a bit of a drama queen.

In December of 1564, he set off on a routine pilgrimage to Alexandrova Sloboda outside Moscow, leaving no one in charge. January 3, 1565, he sent a letter to the boyars he had left behind, letting them know that he was tired of the embezzlement and treason that surrounded him, that he just couldn’t take it anymore, and was giving up the throne. A second letter was addressed to the people of Moscow, saying he wasn’t upset with them at all, just the corrupt nobles that made up his government.

Faced with an empty throne and potential revolt by the townsfolk, the boyars sent a delegation to invite Ivan back. One has to wonder if perhaps Ivan had known all along that he would be asked to return, and all he needed was a bit of attention, someone to say they needed him. In fact, he got much more: when he returned to Moscow, it was on the condition that he would be allowed to persecute treason without due process.

Ivan’s return set off a bloody period in Russian history known as the oprichnina, now synonymous with tyrannical rule and repression. Originally, the Oprichnina (the "widow's portion") was a large area in northern Russia set up by Ivan to belong directly to himself; later, he began using the term to refer to the persecutions mean to clear corruption and treason from the hereditary nobility. The instruments of this sixteenth-century terror were the oprichniki, Ivan’s personal guard, typically mounted on horses and dressed in black.

The oprichnina culminated in the slaughter of townsfolk in Novgorod, a historically independent city on the northwestern fringes. On January 8, 1570, nearly 445 years ago, Ivan accused the town leaders of conspiring with the nearby Polish-Lithuanian Commonwealth, then calmly attended a service at the St. Sophia Cathedral as his oprichniki began carrying out his brutal orders.

Ivan then turned his attention to the city of Pskov, also suspected of treachery. But no massacre ensued. According to legend, a local “holy idiot,” Nikola Salos, approached the tsar, cursed at him, threatened him with divine punishment, and, most memorably, offered him a piece of raw meat. When Ivan voiced his disgust, Nikola allegedly told him, “But this is what you’ve been eating over in Novgorod – the meat of Christians.” In some tellings, this was enough to shame the tsar into leaving Pskov alone; in some, it took his prize horse dying right under him as a warning sign. Within two years Ivan disbanded the oprichniki and brought the terror to a close.

Legends aside, Ivan may have just had a change of heart – or mind. Historians speculate that Ivan had some undiagnosed mental illness, which was the source of his violent mood swings. His instability hurt not just the people of Russia, but also himself: in 1581 he killed his son and designated heir during a heated argument. It’s not without reason that we remember him now as Ivan the Terrible!

For a definitive biography of Ivan the Terrible, get Benson Bobrick's Fearful Majesty, published by Russian Life Books in 2014. 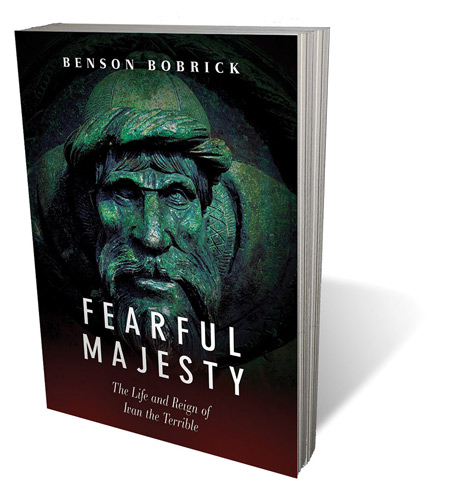 1965
Lunik-5, an unmanned Soviet spacecraft was launched from a rocket in Earth's orbit. It crashed on the moon (in the Sea of Clouds) rather than the projected soft landing.

1945
German surrender to the Soviet Union took effect on this day which has since been a holiday in Russia known as Victory Day.

Save Russia by Air, Land and Sea!

Modigliani and Akhmatova in Paris