Russians typically associate “pryaniki” – traditional Russian spice cookies – with Tula. But that is hardly the only city known for this confection. Residents of Gorodets, in Nizhny Novgorod Oblast, have been baking them for about 300 years.

The ancestors of Russian pryaniki are believed to have been rye lepyoshki (flat, round pastries) made with honey. Later, in the thirteenth-fifteenth centuries, kovrizhki began appearing on people’s tables – more or less the same honey pastry, but with designs on the top for a festive look.  In time, more spices were added – cloves, nutmeg, anise, ground pepper, ginger – and kovrizhki transformed into pryaniki. Spices were expensive, though, and it was not until the eighteenth century that pryaniki ceased to be solely a delicacy for the wealthy and became affordable for families of shopkeepers and clerks. Various cities started baking their own version of the treat.

It’s hard to tell when exactly the craft of pryanik-making arrived in Gorodets. Judging from surviving documents, it was probably in the seventeenth century. By the end of the nineteenth century, the town claimed some 15 shops engaged in making pryaniki. Production was generally a family business, but these shops still had to take on employees. To prevent the recipe from being stolen, employees were strictly prohibited from bringing precise means of measuring weight into work. Ingredients were weighed against stones, horseshoes, and various objects kept by the shop. Thus, in recipes of the time, one comes across phrases along the lines of “three white stones of flour, two horseshoes of molasses, one black stone of honey,” and so on. Every pryanik-maker had its own system, and no one shared their unique recipe. 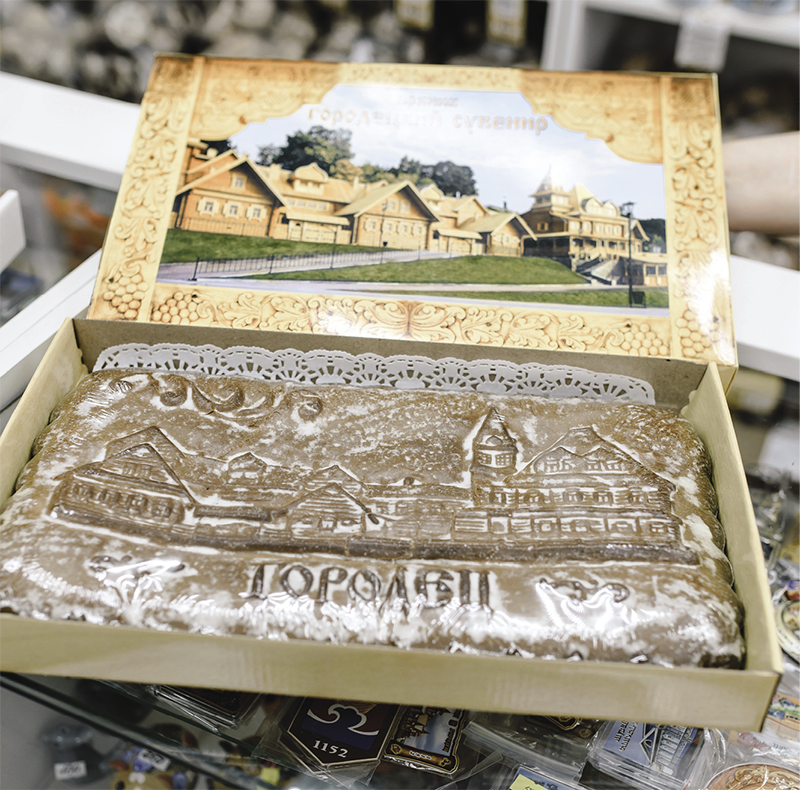 Gorodets pryaniki stood out for their impressive size. They were sometimes as heavy as 20-25 kilograms (44-55 lbs)! Naturally, these giants were prepared infrequently, only for special occasions or for important people. To celebrate Nicholas II’s wedding in 1894, for example, the tsar was presented with a cookie measuring 71 by 71 centimeters (28” x 28”), 18 centimeters (7”) thick, and weighing in at 20 kilograms.

By that time, Gorodets was producing 30 types of pryanik, including with various fillings, such as syrup, fruit, and almond paste. Poorer folk ate a version of the treat made with rye flour, which was cheaper than wheat, but with honey added to the dough – it was inexpensive. To give it more flavor and aroma, bakers might add mint or other herbs, as well as berries or root seasonings. Shops catering to a deep-pocketed clientele would add imported spices – the signature cloves, ginger, and nutmeg, among others.

The cookies were decorated with designs of fish, birds, mammals, and later trains and steam engines. Almost every picture signified something.

Pryaniki from this Volga River town were sold at local steamship docks, and visitors from across Russia attending the annual Nizhny Novgorod Fair (an annual commercial fair that ran in that city from the mid-1500s to 1929) would take them to other Russian cities. They even reached Central Asia, where they were exchanged for spices.

The treat survived revolution and wars. In 1930, Gorodets’ Krasny Pryanichek (Red Little Pryanik) workshop was founded. It also produced other baked goods, candies, and lozenges. The enterprise was reorganized into the Gorodets Food Works in 1956, which since the 1970s has produced pryaniki imprinted with elaborate designs and known as “the Gorodets Souvenir.”

After perestroika, Anna Voronina set out to restore pryanik-making at the facility. She signed a rental contract with the owner and invested what money she had in development.

The city now has three such businesses, but only Voronina’s dates back to Soviet times. The others were opened relatively recently, and had to start from scratch.

About five years ago, Alexei Kalyagin saw a story on local television that said hundreds of thousands of tourists visited Gorodets every year and that the main souvenir they took home with them was a Gorodets pryanik. And so he cooked up the idea of promoting and selling the town’s pryaniki throughout Russia. He applied to establish an “individual enterprise” and began collaborating with Voronina.

Today, thanks to Kalyagin, Gorodets pryaniki are widely available across Russia. The company mostly supplies Nizhny Novgorod, Moscow, St. Petersburg, and Samara, sometimes filling orders from Khanty-Mansiysk, Komi and other remote corners of Russia. The orders don’t always go to stores. Anyone can place a direct order in Gorodets Pryaniki’s online shop.

Since Voronina’s business traces back to the Soviet era, she has access to some of the region’s ancient recipes. Not a bad way to stand out from the competition.

Her pryaniki are made entirely by hand using natural ingredients without any artificial coloring or preservatives. This distinguishes them, for example, from the famous Tula pryaniki, which use egg mélange in place of eggs, as well as additives in the dough to increase shelf life. The downside of eschewing preservatives, of course, is that Gorodets pryaniki last a month at best.

The company claims to use top-rated flour, molasses, margarine, ammonium carbonate, and spices in its the dough, and high-quality raisins and fruit spread (povidlo) in the filling.

“Try some. It’s a traditional filling, apple puree with raisins,” Kalyagin urges, handing me a pryanik.

“Are there any other fillings?” I ask.

“Of course there are. Demand gives rise to supply, and new fillings have shown up in recent years. Starting this year, for example, we have been producing a large pryanik weighing five kilograms (11 lbs). It’s filled with walnuts and caramelized milk. You can choose a filling for practically any pryanik when ordering.” 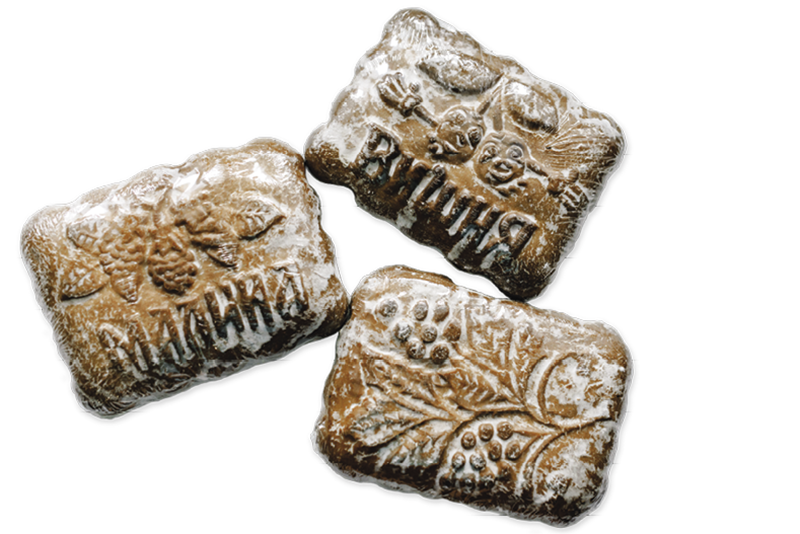 On the large pryanik, there is a depiction of two sterlet fish – a symbol of prosperity. To make this large pastry, the Gorodets Food Works has long used a wooden mold based on one crafted by the Bakharev family, a famous nineteenth-century dynasty in the world of Gorodets pryanik-makers. At the time, the sterlet pryanik was a sort of city emblem. The original pryanik molding board is in the Gorodets Pryanik museum.

The pattern on the large pryanik is an exception in being unchanged over time. Others use more recent designs. There are pryaniki with depictions of the local Artisan Quarter, historical figures, and holiday greetings. Two-kilogram pryaniki featuring an image of Prince Alexander Nevsky are being made in honor of his octocentennial, which Russia is marking this year.

How a pryanik looks depends on its molding board. That’s where the work begins. Some boards can be repaired, but since Voronina’s workshop uses only wooden molds, and never plastic ones, they deteriorate over time. Then the carver carefully creates a new design, so that the pattern on the future batches of pryanik is flawless.

All the other work is also done by hand. The dough is rolled out, placed in a pre-greased mold and “imprinted,” slathered with filling, and then covered in a second layer of dough. It is then ready for baking. The baked pryanik is coated in a sugar glaze, which is another way that the Gorodets pryanik stands out from those produced in other Russian regions. Gorodets pryaniki are glazed on both sides, not just the top. The glaze is a natural preservative that allows the pastry to stay fresh longer. Then the pryanik must be left to cool, to remove any excess moisture. If the product is packed too soon, it will have to be thrown away.

“We can’t fill rush orders,” Kalyagin explains. “As a rule, the production plan comes in a day ahead. That means if you order the pryanik on Monday, the dough has to be prepared early on Tuesday morning, and it will be ready on Wednesday.”

“All Gorodets pryaniki are prepared roughly the same way, but there are some differences in how the dough is made,” Kalyagin says. “Ours is softer and fluffier than our competitors’; it leaves an impression when you press on it lightly. So, before delivery, we carefully pack the product in vacuum packaging, and then it goes in a box, and, based on client reviews, the pryaniki arrive whole and intact. We haven’t shipped to other countries, but if one of your readers is interested in our products, we’d be happy to try.”

Melt honey, sugar and butter in a water bath. Mix flour with spices and baking soda. Pour the hot mixture into the flour and blend thoroughly. Let cool to lukewarm.

Beat in the eggs and then add the water. Knead the dough so that it is neither too sticky nor too stiff. To give the dough a nice color, you may add sugar melted and cooked into a thick caramel syrup, but this is optional.

Take the molding board, grease it well, and fill the mold tightly with dough, using a rolling pin. The dough should fill the mold evenly; remove any excess from the edges.

Flip the molded dough onto a baking sheet lined with baking paper. Repeat until the sheet is full. Bake in an oven pre-heated to 400° F for 10-12 minutes. Important: Do not leave your pryaniki in too long, or they will turn rock hard. Let cool.

To make your pryaniki shine, wipe them with a cloth immediately after baking, then smear them with a hot sugar syrup (add 1 cup sugar to ½ cup water and boil until “stringy”).

All there is left to do is glaze the pryaniki with a glaze mixture made of finely sifted powdered sugar and a small amount of fresh lemon juice.

An office worker gives up his job to walk all 3,645 kilometers of Europe’s longest river. This is his story.

Some may think that vodka is Russia's national drink, but the truth is that Russians can live without vodka, but they cannot survive without tea. In fact, there are few places on earth where more tea is consumed per capita than Russia. We take a look at the origins of this obsession, from samovars to tea with jam to torts and pryaniki. You'll be brewing a cup yourself before you finish.

An Ear of Dough: The dish that tamed Siberia

Russian pelmeni have a storied history and are most often associated with Siberia. Here's our recipe.

Pryaniki are a time-honored cookie enjoyed at holiday time. Get yours here.

Kozuli: these fragrant, decorative cookies have their origin in the Russian North, in Arkhangelsk, to be more specific. And they are perfect for a holiday celebration.