My great grandmother lived to be 97. She sang bewitching old songs and scabrous chastushki, the meaning of which escaped me. She fed me bagels that I dipped in tea, and soft boiled eggs, which I ate with a spoon while sitting on the floor. She collected wondrous, desirable things: coins in a hardened leather coin purse, an icon in a plastic frame, and false teeth in a glass of water.

I don’t recall at what point Baba Dunya was transformed from the joyful, sunny essence of our family into its polar opposite. One moment she was rocking me in her arms and smiling, then there was a gap in time, and I could no longer drink tea with her, because her teacups were unwashed. I was not allowed to go into her room because it was not clean, and I did not hug her, because her robe was patched and her apron was filthy. I dodged her caresses, because she was wrinkled and gave off a frightening smell.

I knew that she was dying, and that my mother was sitting by her bed, resting a tender hand on her forehead. They did not allow me to say goodbye to her, I did not see them take away her body, and they did not allow me to go to the graveyard. When they opened the window of her room, a dove alit on the windowsill, and we did not doubt for an instant that this was the soul of the departed.

So it was with mixed feelings of bitter guilt and disgust, overcome with shameful and cowardly thoughts, that I joined the Children of 1917 project.

Old people scared me, with their weakness and ill health, their inhibited thoughts, words and actions. How could I enter a home that smelled of a century of dust, decrepitude and god knows what else? How could I untangle the incomprehensible words spoken in their tremulous ancient voices? What would I talk about with people whose lives faded and wilted long before I even showed up on Earth?

And would I have to sit next to them and touch them?

The first centenarian I met was Antonina Alexandrovna Kusleyeva, in Veliky Novgorod, about six months before the start of our main expedition. We were doing a test-of-concept interview and filming, preparing the video for our crowdfunding campaign.

In this first interview, Misha and I made a wrongheaded decision. Not personally acquainted with Antonina Alexandrovna, we did give proper consideration of her qualities as an interlocutor. We instead proceeded on the assumption that the babushka would have diminished sight and hearing, remember little, and be incapable of speaking coherently for any length of time.

And so we immediately sat our heroine down alongside her daughter, and the latter answered most all of our questions. Antonina Alexandrovna, meanwhile, smiled at her own thoughts and mainly chatted with her cat. We managed to extract a few small stories from Antonina Alexandrovna, but for the most part the meeting was a hot mess.

But for me, personally, it was a revelation. I for the first time realized that old age was not scary. That 100 years is no reason to throw up one’s hands and stop taking care of oneself. That even at that age one can be tidy and pleasant. Antonina Alexandrovna, despite my fears, in no way resembled Baba Yaga. Round-faced, smiling, with a button nose, and wearing her house frock, she was instead the spitting image of Ukhti-Tukhti.

She tenderly treated us to candies, worried about the breeze blowing on Misha, and fussed over us as if we were her own grandchildren. And yet we, ingrates that we were, left thinking that there was no reason to make a return visit to this particular heroine.

The crowdfunding was of course successful, and so we prepared our project and this spring set out on our expedition. For each visit to a centenarian, I leaned on the protective wall of prejudices I had constructed about old age, and yet with each new visit, a part of that wall turned to dust.

I saw how elegant that 100-year-old women could be, how they put on their scarf or gloves with dignity, how snow white were their tablecloths, how their clean samovars and tea services gleamed in the morning sunshine, how gorgeous were the geraniums blooming on their windowsills, and how pleasantly obese were their housecats.

I witnessed how the old women watched after their health, how they protected their fragile bodies, and how they maintained their sanity. I saw how much pleasure they took in greeting us as guests, and how they liked to gossip, laugh, and revel in the small joys of life.

And all of this would have been impossible if these babushkas had not been surrounded by loving, patient and concerned descendants. Were it not for them, I am certain, our heroes would not have lasted their full century.

And so it was that we decided to make a return visit to Antonina Alexandrovna in Veliky Novgorod.

She greeted us like old friends, immediately recognizing us and remembering our names. Our conversation was easy, although we did have to yell our questions so that she could hear us. We gave her free rein in the interview and she fluently and passionately told us the story of her life.

Antonina Alexandrovna shared with us her photo album and showed us pictures of her mother, of herself in a pioneer’s scarf, and all sorts of other images that made up the kaleidoscope of the century that had passed. She brought out the awards she received for her labor, and after that showed off her cat, in order to demonstrate how intelligent and tender it was.

And for this meeting we did not require one of her relatives as a “translator.”

As we parted, we squeezed our babushka’s hands for a long time – they were surprisingly warm and soft. And we embraced as if we were saying goodbye forever, which most likely we were.

Today, I no longer fear old people or old age. But I do have a new fear: that we will suddenly receive news that one of our heroes has departed this life without us having had the opportunity to say goodbye. 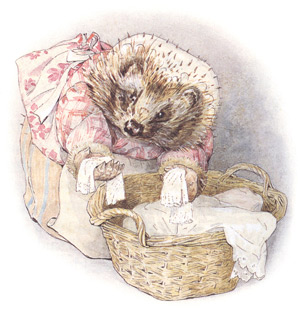 A pleasant hedgehog who was the subject of the first Beatrix Potter story translated into Russian, in 1961.