As far as rock-and-roll goes, the Soviet public was a little late to the game. The Iron Curtain was not hermetically sealed, so recordings of the Beatles and Rolling Stones trickled through, bringing with them not only new musical styles, but also hippie culture and other crazy new ideas. Unfortunately, crazy new ideas were poisonous to Soviet leadership, and, under the weight of bans and harsh criticism, these “bourgeois-degenerate” recordings took some time to build up to widespread popular appeal.

The Beatles had already broken up by the time some of the USSR’s most prominent rock musicians started forming bands and experimenting with the new style. One of the most famous experimenters, Boris Grebenshikov, formed the legendary Aquarium in 1972, on the Bob Marley-inspired principle that whoever wanted to join the band could take part. Like other such bands of the time, Aquarium started out singing the Beatles before gradually finding their own voice and beginning to perform with their own songs. For Aquarium, “own songs” meant Grebenshikov’s compositions with their heavy dose of Western influence.

The band’s fans split its Soviet-era history into two distinct periods: “history” and “pre-history.” Roughly speaking, the divide marks when Aquarium became a “real” band, with its own shows and albums. In the backward world of Soviet underground music, the shift came after the band was officially banned in 1980, for a supposedly scandalous performance at a music festival in Tbilisi. Grebenshikov, as the front man, got hit the hardest: he lost his job and was forced out of the Komsomol (to add insult to injury, the scandal may have pushed his wife to file for divorce). 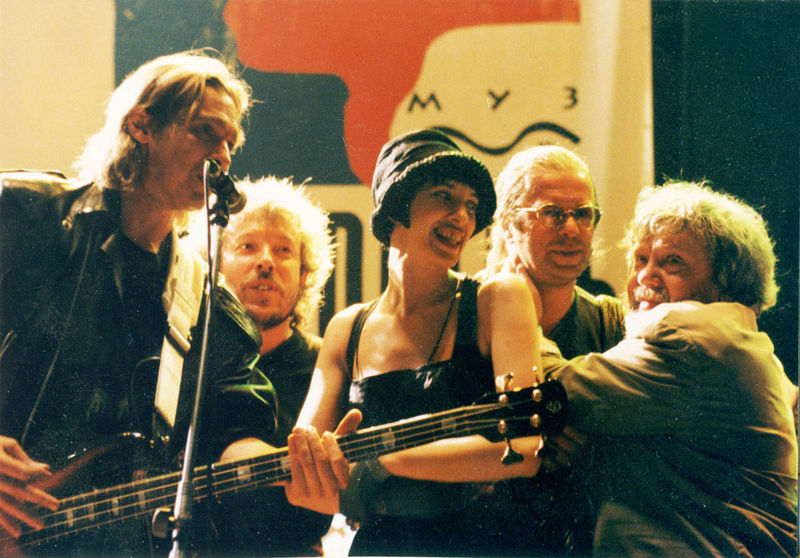 Grebenshikov (2nd from right) with other leading figures of underground Soviet culture.

Even as their popularity gained, and as rock became more and more familiar to Soviet audiences, there remained the sense of being late to the party. “Rock and roll is dead,” Grebenshikov sings in 1983, “but I’m not yet.” But even if rock and roll was dead (a questionable proposition, in any case), there remained a wealth of other genres and styles – including the tried and true method of weaving in Eastern religion and exotic instrumentation.

Oddly enough, for all his contributions to Soviet and Russian rock, Grebenshikov is probably most remembered for Aquarium’s rendition of a completely not-rock song, Gorod Zolotoy (“The Golden City,” or just “City”). Written by poet Anri Volokhonsky to match a Renaissance-style lute tune, the song is full of Biblical imagery of a heavenly city, and general lyricism: “he who loves is loved; he who is full of light is holy.” Grebenshikov and Aquarium continue to write and sing to this day, and we continue to listen to them, remember them: be it for the calm philosophy of the Golden City or for the youthful despair of “Rock and Roll is Dead.”