“Careful stepping over the transom, we’re fixing it,” the staffer said as she led me into a nineteenth-century wooden house, part of the Chastny Vizit (Private Visit) hotel and restaurant complex.

Elena Manienan greets me from behind a table that is covered with a beautifully ornate tablecloth. Alongside her are a sleeping cat and dog, and she is surrounded by charming details that express her recognizable style. “So many people walk through the door, we have to get that transom fixed,” she says.

Five minutes later, the table is set with a large pot of tea, three types of jam, khvorost (Uzbek fried pastry dusted with powdered sugar), and an apple pastry. And Elena has started telling me her story.

“I was raised by my grandmothers, as my mama-papa childhood ended at the age of three, when they got divorced. My mom didn’t want kids, and our relationship wasn’t easy.”

We spoke for two and a half hours, interrupted by a tradesman who fixed the transom and a chef making the restaurant's signature liver, orange jam, and cognac paté. (“Needs more balsamic, and add more salt. Don’t waste your time bringing it here yourself, send a waitress.”) When I asked what the chef was making, she immediately had them prepare a platter and some toast, so that I could taste it. It was delicious, like no paté I’d ever tried.

Born in Moscow in 1958, Elena spent most of her early years with her grandparents on her father's side. Her grandmother, Klavdia, was highly-educated, and the family was "beloved by the government," which meant they had good jobs, a small apartment inside a big kommunalka (walk down the corridor, and just before the kitchen there was a door to three rooms and a bathroom), and were able to procure a few spices other than the omnipresent Soviet bay leaf. Much later, Elena found out that the building had once belonged to her grandfather.

Klavdia taught Elena to appreciate the finer things in life: theater, music (she sang in a choir at the Bolshoi), literature, design, and table decor. For ten months of the year, that was her life. The remaining two months she spent in a tiny village in the South, in Krasnodar Region, at her other babushka's place. There, babushka Olga tried to “get all that Moscow nonsense out of her,” Elena said, and teach her some real-life skills, like feeding pigs, carrying big buckets of water over rocks while scaring snakes away, husking corn, and painting the house white with stone paint (using a pigment made from rocks boiled for two days).

They would work all day every day, except Sundays, until six. Then Elena would go for a stroll with her local friends, and her grandmother would sit on a tree stump and have a chat with her neighbors. They would still be chatting when Elena came back. “Listening to those conversations was magical,” she recalls. They talked about everyday things, like weddings, deaths, and each other’s business, and they reminisced about the war, which had affected the region deeply.

They remembered how during the war the local river was red with blood for days, so they had to go to a tiny stream to get clean water. There was so little of it, there was a line of people waiting. The local pear tree (“You know those tiny little pears?”) was used to string up partisans, and Olga had been forced to lie on the floor of her house, holding down her 3 children so they wouldn’t be hit by bullets. One day there would be Germans, the next, Soviets. “And they were each as bad as the other,” Elena remembers her grandmother saying.

During Elena's childhood days outside Krasnodar, the neighbors were all different: Russian, Armenian, Moldovan, Circassian… But they all got on very well and never fought over their differences. They shared their traditional recipes, and you couldn’t go into any of their homes without being fed something, even if you dropped in for only a second.

One recipe Elena remembers fondly is toursha – marinated green beans, and now Elena serves them at her restaurant. “I dream of popularizing it across the world,” she says, noting that it’s an Armenian recipe.

Elena says that while the second babushka, Olga, her mum’s mom, wasn’t her favorite, she did learn a lot from her about having a good work ethic, and she cherishes that. It’s that work ethic, she says, that pulled her and her French husband out of bankruptcy through the baking of Russian pies and selling them at a market. Later, they turned it into a business. It’s also that work ethic, combined with her Moscow babushka Klavdia's elegance and taste, that allowed her to create high-end service and an eco-village 300 km outside Moscow.

“I wouldn’t have done it on my own. I gather people around me, although it can be hard to find creatives willing to move to the village. Are you available?” she asks keenly.

She finds young men in nearby villages and turns them into chefs at her restaurant. Later, they get high-paid jobs in Moscow.

Elena has adopted 13 children (in addition to three of her own). Her now-fixed transom has been crossed by a number of high-profile guests, including celebrities and politicians, although she says she doesn’t care about politics. “I believe in love, in food, in a tree, in a cat, in being together.” And she seems to have a lot of love (and toursha, pirozhki and paté) to share with the world. 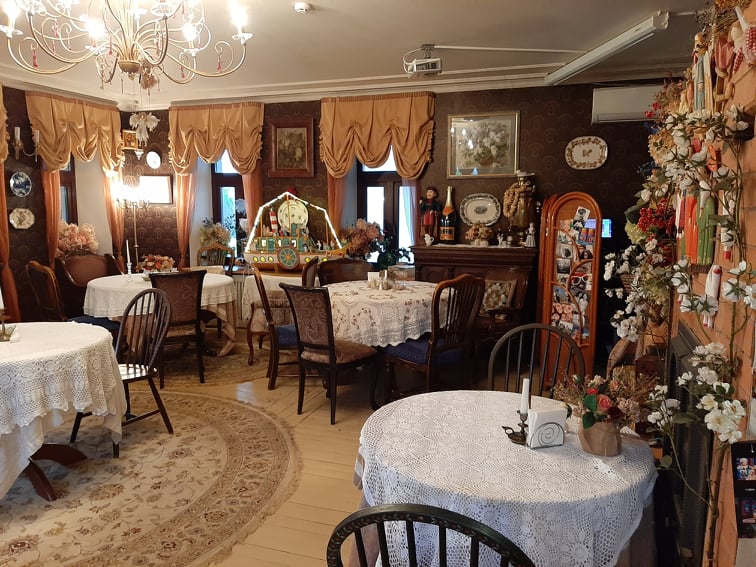 Here’s Elena's recipe for toursha, which is my official attempt to help her make it known around the world.

Cut off the ends of the beans, chopping the longer beans in half.  Blanch the beans by boiling them 5-7 minutes and then tossing them in a colander.

Blanch the cauliflower (separated into pieces) for 4 minutes and throw in the colander.

Gently mix the beans and cauliflower with all the other vegetables (bell peppers, carrot, garlic, and chili peppers) in a large glass bowl, adding the cauliflower in last.

Boil the water, add salt, sugar, pepper, allspice and bay leaves. Turn the water off as soon as it boils and allow it to cool to room temperature, then pour over the vegetables.

Place a plate and something heavy on top of the bowl with vegetables and marinate for three days before serving.