Don’t know what’s happening in the Kerch Strait? Here’s a nice explainer that captures the main points of what may be a quick-to-change situation.

1. Rock on! One Russian rapper was jailed last Thursday for performing on his car, which he did after prosecutors prevented him from playing a gig. Russian prosecutors told local venues in Krasnodar that Russian rapper Husky’s work contained elements of extremism, which led to the whole playing-on-car situation. Husky is known for performing music that is critical of authorities and calls out police brutality. Luckily for Husky and his fans, the rapper was released Sunday, prior to a support concert being hosted for the artist.

2. What’s going on with the upside-down umbrella carrying several men over the Kremlin? Nothing, nothing at all says Russia’s Federal Protective Service (think Secret Service, but Russian). Well, you can judge for yourself, but, based on the video, we think there might be a secret plot to reincarnate Mary Poppins and bring her powers to Russia.

3. Think fairy tales don’t exist? Tell that to the Russian beauty queen who just became a real-life queen by marrying the king of Malaysia. Oksana Voyevodina, formerly Miss Moscow 2015, just became Rihana Oxana Gorbatenko and married King Sultan Muhammad V of Malaysia. The name change isn’t the only update: the bride also converted to Islam earlier this year. Regardless of religion, age, or whether status of pauper or prince, we offer this couple the same congratulations we offer any other: Поздравляем с днем свадьбы! 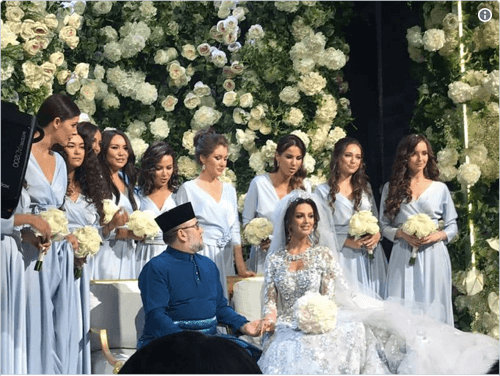 — The Federal Protective Service, regarding something we think highly unusual

How to Celebrate Russia Day