Artist Sasha Sokolova has undertaken a personal, artistic and cultural project to document the daily life of Russia’s remaining war veterans, including that of her grandfather, who is also her mentor and teacher, through her paintings.

The May/June 2018 issue of Russian Life features 9 examples of her beautiful portraits, with extended captions offering biographical information on the veterans who are shown in the portraits. Here, for example, is one on Ninel V. Karpova. 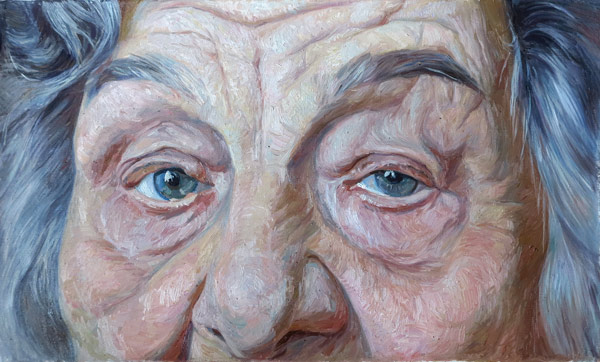 Born on February 26, 1925, in Kharkov. She graduated with a nursing degree in 1942 and was sent to the Volkhov Front. She took part in battles near Leningrad, fought on the Kursk-Belgorod Arc, fought to liberate Ukraine, Poland, Germany, Czechoslovakia, crossed the Dnieper, the Oder and other rivers, and stormed Berlin. During the war, Karpova herself evacuated from the battlefield more than ten wounded soldiers and provided them with life-saving medical assistance. On Victory Day she was in Prague.

After the war she worked as physical education teacher in kindergartens. She has long been actively engaged in patriotic education of Moscow youth.

She was awarded the Order of the Patriotic War, Second Degree; Order of the Red Star; medals “For Combat Merits,” “For the Taking of Berlin,” “For the Liberation of Prague,” “For the Victory over Germany,” the designation “Excellent Medical Officer,” and many other honors.

If you are in Moscow, Sokolova’s exhibition is be shown at the Pop Up Museum in Moscow during May 8-27.

Tsarevich Alexei and the Worst 10th Birthday Ever