"The life and the world are so beautiful! And I'll try to keep working in my art, openhearted and sincerely." (Nina Novikova, St. Petersburg Artist)

Russian visual and decorative fine arts are some of the best in the world. The forms that often come to mind first are Faberge, holy icons, lacquer and many more. Recently, I became acquainted with a wonderful lady, from St. Petersburg, and her work. Nina Novikova is, in my opinion, one of Russia's promising artists of today. Nina's love is painting and she works in oils. You will have the opportunity to view several of her works, at the end of this article, but Nina's life is what we will focus on, for now.

Childhood and Life during the Soviet regime . . .
Nina was born in 1961 and grew up in Nizhniy Tagil, an industrial city in the Urals, with her mother and two elder sisters. Her natural talent for art was apparent by the young age of five. Nina began her training at age ten, first in an art studio and, later, at an art school. She completed her formal training in 1977, with excellent results.

Nina says, "As I remember, I could paint everything and everywhere and anytime. When I was eighteen, I left home and went to Leningrad (St. Petersburg) because I knew that this city was very close to my soul. I believed that here my creative ability could be increased, as well as possible. But, I realized that, for a girl from the province, without any ties to art circles and in spite of my talent, it would be difficult to become a student of any of the art institutions. However, it did not stop my wish to study art. I became a factory worker and a free-lance student, attending classes at the Academy of Art, Mukhina's Art College and Theatre Institute. My teacher was S. Epstain, who paid great attention to my creative growth during my first three years of education, in St. Petersburg."

As a free-lance student, Nina had greater latitude in her artistic expression. Remember, this was still during the Soviet era. "All art education was built on monolith principles of 'socialist realism,' and all art was working for 'social order.' 'Society' was defined as the Communist Party and it had an attentive eye on the creative process. It tried to get full control on all sides of our lives. So, 'non-official' art went underground." According to Nina, artists were, and are, the most independent minded part of the population. Art, if left unchecked, could easily affect the peoples' view of the Party and the world. Every effort was made to not let people know about the art and culture of other countries. This is not to say that personal development was impossible during the Soviet time, but it was limited and every attempt was made to direct it in the "right" direction.

These limitations affected, not just art, but every aspect of ones life. Survival was the top priority. "My art fate was not exclusive: all these tendencies directly affected my creative, intellectual and even physical abilities. The possibility of introducing art was granted only to members of the Artist Union, which had to 'play' by the rules for survival."

The Advance to Freedom . . .
1991 was the year that myself, and many fellow artists, remembered that we were artists. I had not painted for five years. With the fall of the Iron Curtain and new-found openness, Russian artists found themselves free to express themselves and to present virtually any form and style of work. Increases in foreign tourists opened up a brand new market for everything from traditional folkart to the most contemporary expressions.

This new freedom was a welcome thing. But, other problems arose, as a result. First of all, the Russian economy has been and still is in crisis. Secondly, artists, like Nina, were never encouraged to learn about other countries, cultures or languages. Russian artists were free to create and sell their own works. Most, however, have hesitated to travel abroad because of lack of money, knowledge of other languages, etc.

The Russian government does not, financially, support the artists. Most funds are from foreign sources, such as Soros. Nina points out that these organizations tend to endorse a small and select circle of artists, not everyone. The quandary is familiar: supplies such as canvas, paints, etc., are high priced, while the selling prices that an artist can realistically get are low. This makes the cost of attending art school very high, as well as affects the livelihood of all artists. The artist is torn between the love of their art and the drive to create, as opposed to survival.

"Of course, now nobody is searching what we are doing with our art. But, if you have no money and/or connections, it is very hard to organize your own exhibition and become known to the world." Enter the Internet! "The Internet is a great occasion for artists to show their works to everybody and is an invaluable chance to be involved in the planet life." Nina believes that the Internet will play a significant role in Russia's future. Till now, only a handful of the total number of struggling artists are on the Internet. The problems are the same; lack of money and computer skills within the artist community.

Near Disaster and New Hope . . .
For many years, Nina suffered from an eye disease which caused everything that she could see to appear curved and distorted. Obviously, this caused her considerable difficulties in both her art and daily life in general. It appeared that Nina's painting days were over. She says that she was truly and invalid.

Nina was fortunate enough to have had surgery on her eyes, during the summer of 1999. With her sight restored, she has renewed hope and a much different view on life.

Nina had the experience of a lifetime during December of 1999. She got to go on a ten day bus trip to Europe! The tour visited Prague, Dresden, Amsterdam and ended up in Paris on Christmas Eve (Dec. 24th).

"If someone would say to me, fifteen years ago, that I will travel through Europe, absolutely free, I would not have believed them. But, it has happened and it is happiness!" Nina marveled at the new cultures she visited and at how distorted much of the information about foreign countries and their cultures, by the Soviet media, had been. This trip gave Nina new motivation and hope. "Somebody could say; 'what is possible to see and feel during so short a time?' I can answer that artists' impressions live in an other dimension. This trip gave me a strong impulse for my art work."

Nina's cheerful and positive outlook on her life is impressive and touching. She loves St. Petersburg and has no plans or desire to leave. It is her home. Nina makes ends meet by producing, what she describes as, "souvenir" items. However, her goal is to do more painting and, eventually, make her living from this.

Reality Check . . .
Nina's work at, what she refers to as the state organization, pays her $15 USD per month. This is not enough to support herself and her young daughter, Ann. However, this job comes with a few benefits: school for Ann, medical insurance and the hope of better housing. Nina and Ann live in a 10 square meter (ca. 33 sq. ft.) room. It is one of two rooms in an apartment. The other room is home to a family of three and all five share the kitchen and bath. Nina points out that these are not the worst living conditions in St. Petersburg.

Nina's Dream . . .
"I want to paint, paint and paint everything: nature, people, nice cities, etc. I'll try to do it as well as I can and as far as my life circumstances will let me to. Some of my old friends, from Art Academy time, whom I met not long time ago, are managers in one of St. Petersburg's galleries. They promised to help me make an exhibition, there, when I have enough works. I'm going to work hard, because I want a better life for my daughter and myself."

The Works, in Oils, of
Nina Novikova
St. Petersburg Artist 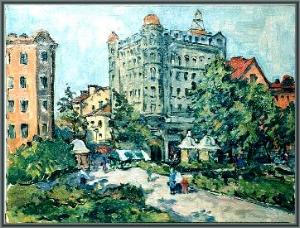 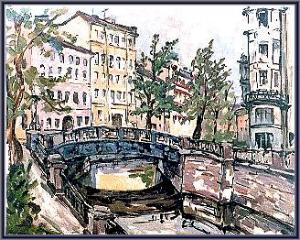 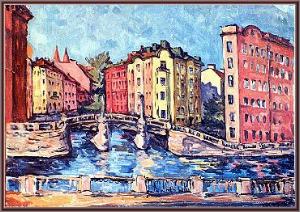 All images appear with the kind permission of Nina Novikova and her representative, Alexander Tikhonov.

Come Hell or High Horses, Let's Save This Plane!

9 Ways to Brush up Your Russian

An ode to men, the opposite of old cat ladies