On this day 20 years ago – December 12, 1993 – the current Russian Constitution was enacted, marking the end of a turbulent and even violent constitutional crisis.

The US had the Articles of Conferedation – Russia had a Soviet relic, the RSFSR Constitution of 1978. Alongside the old Soviet legislative branch – with Cold-War names like “Supreme Soviet” and “Council of People’s Deputies” – there now stood an entirely new executive leader, the Russian President. For a country that was just finding its bearings and figuring it all out, having an outdated constitution was certainly not much help.

By early 1993, the “leader” of Russia wasn’t just going by a new name (Mr. President, not Mr. Secretary!), he was also no longer the center of all power. In sharp contrast to the days of old, this new-fangled concept of democracy now meant that the legislature, the nominal representative of the people, actually had all the rights in deciding how the government would work. It just so happened that the legislature, under the leadership of Speaker Ruslan Khasbulatov, was not too pleased with President Yeltsin’s program of rapid economic reform, and was happy to have the power to limit him in those efforts. 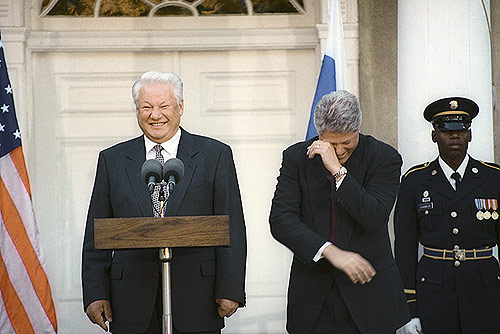 Yeltsin was all about the "will of the people" at this point – he peppered his speeches with references to narodovlastie – literally, the rule of the people. And just when the legislature felt smugly secure in knowing that it was elected by those same “people,” Yeltsin went and redefined the people’s will: he called for a referendum, a direct vote on “confidence in the Russian President.” In April 1993, the “confidents” won out, with a final tally of 58%. 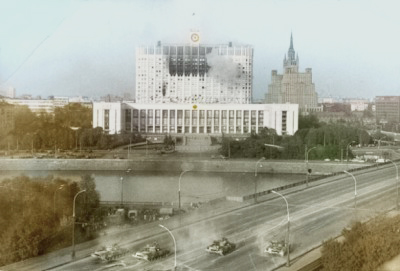 For the legislature, it was all downhill from there. Now anything they tried in opposition could be met with “oh but the people believe in me.” The Duma dug in, insisting on the unconsitutionality of the President’s actions, escalating the crisis until the army got involved and, in October 2013, on Yeltsin’s orders, stormed the White House (which in Russia is, confusingly, the legislature’s domain). Out of the chaos rose the new constitution, proposed as a draft by Yeltsin, and approved on December 12, 1993.

How was it approved? By referendum, of course.

This Just in From Ukraine...