Chechnya has been in the news, quite frequently, of late. As the ongoing, almost ancient, ethnic conflict between the people of this region and Russia escalates, so does the issues of human rights, freedoms and cultural diversity of the Russian Federation.

The Chechens are the ancient peoples of, and thus, indigenous to the North Caucasus. Their language is an unique one, closely associated only with that of the Ingush. The Chechens and their ancestors have apparently lived in their North Caucasus homeland for several thousand years. During their long history, they have battled against the Iranian Alans and the Mongol Golden Horde. In the early 1800s, an ever expanding Imperial Russia conquered the Chechens, after a lengthy engagement. Chechnya, officially, became a part of Russia in 1859.

Conflict with Imperial Russia is as old as the Impire, itself. The most distinctive regions of resistance were Chechnya and the bordering region of Dagestan. The North Caucasus Republic of the early 1900's, which included Chechnya, declared its independence in May of 1918, not long after the Bolshevik revolution. This region became known as the North Causasian Emirate, as of September, 1919. Early the following year, the Red Army invaded Chechnya in response to the rebellion against the Bolsheviks. This rebellion was finally put down in late 1921.

The Congress of the Mountain People met January,1921. It was led by Joseph Stalin (born Iosef Vissarionovich Dzhugashvili of Georgia), the Peoples' Commissar of Nationalities. The Congress formed the Mountainous Soviet Republic of the Russian Soviet Federated Socialist Republic (RSFSR). The following, albeit brief, period of peace was shattered by the political oppression and implementation of collectivization which characterized the 1920's and '30's. Civil unrest and rebellion resulted and escalated until the dawn of WWII. The rebels of Chechnya and Ingush anxiously awaited the German troops and saw the Nazis as their, would be, liberators. This treason to the Soviet was used against the people of this region and resulted in their massive deportation, from their ancient homelands, to other parts of the Soviet Union.

Eventually, thanks to the fact that Nikita Khrushchev saw the deportations a contradiction to Lenin's ideals, the Chechno-Ingush republic was restored and many deported people returned to their homelands (1957). Regardless, the Islamic mountain folk have never given any credence to the Russian, or Soviet, claim to their land. From the early 1960's to the 1990's, there existed a period of relative calm over this issue.

In November of 1990, the Supreme Soviet of the Chechno-Ingush Autonomous Soviet Socialist Republic adopted the Declaration of State Sovereignty of the Chechen-Ingush Republic. The document declared Chechyna to be a sovereign state, equal to the other, then, Soviet states. This action was not unlike similar declarations made by other Soviet autonomous republics of the time. Thanks to the escalating power struggle between factions led by Boris Yeltsin and Mikhail Gorbachev, these declarations received little notice from the Kremlin.

Boris Yeltsin, however, took notice and used this ethnic unrest to advance his cause. He gained considerable support and votes from these non-Russian ethnic groups and regions by promising to increase their autonomy and to forgive the anti-Russian activities of their rebels. Roughly 80% of Chechno-Ingush voters voted for Yeltsin in the first presidential election of June 12, 1991.

In the Dec. 12, 1993, Russian Constitution (Article 65), Chechnya is listed, among others, as being component of the Russian Federation. Prior to the ratification of this Constitution, Chechens seceded from Russia and declared their independence on November 2, 1991. They passed a constitution, on March 17, 1992, and have considered themselves to be an independent state, with a president and parliament, ever since.

Chechens are a mountain, tribal clan folk with a dynamic sense of independence. The Russian poet, Mikhail Lermontov, summed these peoples' character best when he wrote; Their god is freedom, their law is war (1832). Sometime in the beginning of the early 1600s, these tribal people were converted to Sunni Islam; the orthodox body of the Islamic faith; and the Sufi sect. While Islam is a key factor in Chechen culture, these people still hold true to their ancestral clans when it comes to regional political and societal concerns.

Chechnya is roughly 6,000 square miles. Georgia borders to the south, Dagastan to the east and north and Stavropol Krai and North Ossetia to the northwest. The Ingush Republic lies to the west and this border is under dispute. Chechnya is a geographical wonder. Fertile plains dominate the north, nurtured by the Terek and Sunja Rivers. The southern portion of the region is home to the heavily wooded foothills and the northern slopes of the Caucasus mountains. The highest point, in Chechyna, is Mt. Elburz at 18,481 feet. 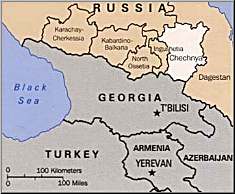 The last census (1989) reported a total regional population of 1,270,000. Of the areas currently a part of Chechnya, there was a total population of 1,084,000. Roughly 715,000 of these were Chechens; 269,000 Russians; and 25,000 Ingush. The capital of Chechnya is Grozny which is an important oil refining center. One of Grozny's most valuable assets is its rail and pipeline networks; especially the Caspian oil pipeline.

1945
The Charter of the United Nations (UN) was signed in San Francisco, California, by 50 nations.