Reviews of the Russian Editions

Book 1: The Pet Hawk of the House of Abbas 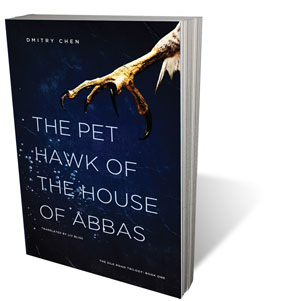 "It has been a long time since I happened upon a text that not only comes to you visually but seems to tickle the other senses too, with the aroma of meat being roasted with savory Eastern spices in the courtyard of a caravanserai, the light rustling of ethereal silk sliding from a maiden’s tender shoulders aglow with love and passion, the thrumming of an arrow in flight, the glancing glint of a blade as it strikes a death blow. You will find all of that in this remarkable narrative."

"Pet Hawk is set in 749 to 751 C.E. But...there is nothing alien or incomprehensible about the world that its heroes inhabit. And that, of course, is because the book tells of the simple and the eternal – of life and death, of friendship and enmity, of war and peace."

"The thing that moves both the novel’s plot and history as told by Chen is not their entertainment value but a good dose of curiosity. His Sogdian wants to know what is going on and why, and for that he puts his life at risk time and again. But he is never bored. And, for that matter, neither are we."

"The Pet Hawk of the House of Abbas is not only a best-selling tale of action and adventure but also a surprisingly poetic book, and in that unexpected coupling of poetry and hard-bitten thriller lies all its charm... Chen’s books are of course easy to read, but they are also irreproachably historically accurate and literally bursting at the seams with offbeat and often eye-opening information..."

"Chen’s books send a message, loud and clear, that even in a wide-open world there are and always have been captivatingly interesting, unknown worlds and civilizations, other little cogs in the tower clock of human history..."

Book 2: The Pet Foal of the House of Maniakh

"There is no contemporary novel cycle that links and unites times and civilizations as lucidly as this, putting a whole world in the palm of your hand... Chen not only has the ability, often described by other critics, to present a multitude of historically precise and vivid details (a monastery’s onion soup, the battle armor of the age in question rather than of the one before, the magic amulets) but also produces a uniquely musical language, achieved largely by the unobtrusive use of the poetry of the time. No one writes like Chen in Russian today."

"This is a very intense and mournful book, and one that makes us look at life, at history, and even at ourselves as we never have before. The historical canvas of Chen’s books is hard to miss, but in this new novel you will find yourself forgetting the backdrop as you... go with him in search of a traitor, enjoy time spent with old friends, are racked with doubt and fling yourself into a dizzying vortex of love, protecting the one who means more to you than anyone else and never guessing, unlike everyone around you, that the two of you are one… It is simply impossible to overlook Chen’s books... They are surprising, recognizable and like nothing else you know. And that is why they stand alone, luring you in and always surprising you, making you think and inviting you to sink your teeth into the narrative and the history. Like his hero, he does solitary battle with drab minds, while drawing more and more converts to his side."

"The gleaming green silk of a woman’s gown, a strange golden shoulder-clasp, a copper vessel exhaling hot steam, a wreath of aromatic laurel and oak leaves, a soldier’s curved sword… Chen packs these odds and ends into his text with the selfless liberality of a merchant who stands ready to spread every one of his thousand vividly colorful rugs before you, even though he already knows that you are not going to buy anything. But so great is his love for his merchandise that he is happy just to have you see it."

The Pet Monkey of the House of Tang

"Chen has... shown us something resembling the universal responsiveness that in Russia was last practiced by... well, by Pushkin... [and now in the West] by Orhan Pamuk... J.M. Coetzee... [and] Kiran Desai..."

"Chen is as comfortable in the time of the eighth-century Tang Dynasty as Umberto Eco was in medieval Europe and crafts a plot with a hand as deft as Boris Akunin’s.

"The novel is the stomping ground for necromancers, poisoners, the unseen, dwarves, a witch on a roof, conspirators and bureaucrats, the latter indispensable because direct trade in silk is forbidden and it has to be bought and sold through the appropriate Imperial departments."

"Out of everything that I have read, I would like to single out a brilliant debut novel by the writer who lurks behind the pen name of Chen. His book The Pet Monkey of the House of Tang is a poetic masterpiece, although it comes with all the trappings of a thriller set in medieval China."

Five Russian Words You May Be Misusing