Click into any of these accounts, and not only will you find the usual statements and photo ops, you can also watch big conflicts unfold on the small screen. In 2017, a Russian MFA account got into a fight with an account run by Ukrainian officials. The spat was short and drew plenty of laughs, but it was a microcosm of a serious conflict with tens of thousands of casualties and no end in sight.

Since then, the Russian MFA hasn’t lost its warring spirit. Its latest battleground is World War II — specifically, the Molotov-Ribbentrop Pact, a contentious flashpoint in World War II memory. Signed on August 23, 1939, the Molotov-Ribbentrop Pact appeared to be a neutrality pact between Nazi Germany and the Soviet Union, but it contained a secret addendum that divided Eastern Europe into German and Soviet spheres of influence. After claiming its half of Eastern Europe, the Soviet government started a war with Finland and deported and executed hundreds of thousands of Polish, Lithuanian, Latvian, Estonian, and Romanian citizens. Today, people in these countries mourn the pact as the start of Soviet occupation. On the other hand, official Russian historiography enormously downplays Soviet repression in the annexed territories, preferring to play up its role in “liberating” the territories after Germany violated the pact and invaded them. Putin’s regime is eager to claim heritage to the myth of a savior Soviet Union, and thus it decries any interpretation that could put the Soviet Union in a bad light.

This August was the 80th anniversary of the Molotov-Ribbentrop Pact, and the Russian MFA saw a prime opportunity to set the record straight (in their eyes). A few days before the anniversary, the Russian Mission to the OSCE launched a hashtag, #TruthAboutWWII, to discuss “the international law prerequisites for the start of WWII.” The rest of the MFA’s Twitter family rushed to amplify the hashtag. 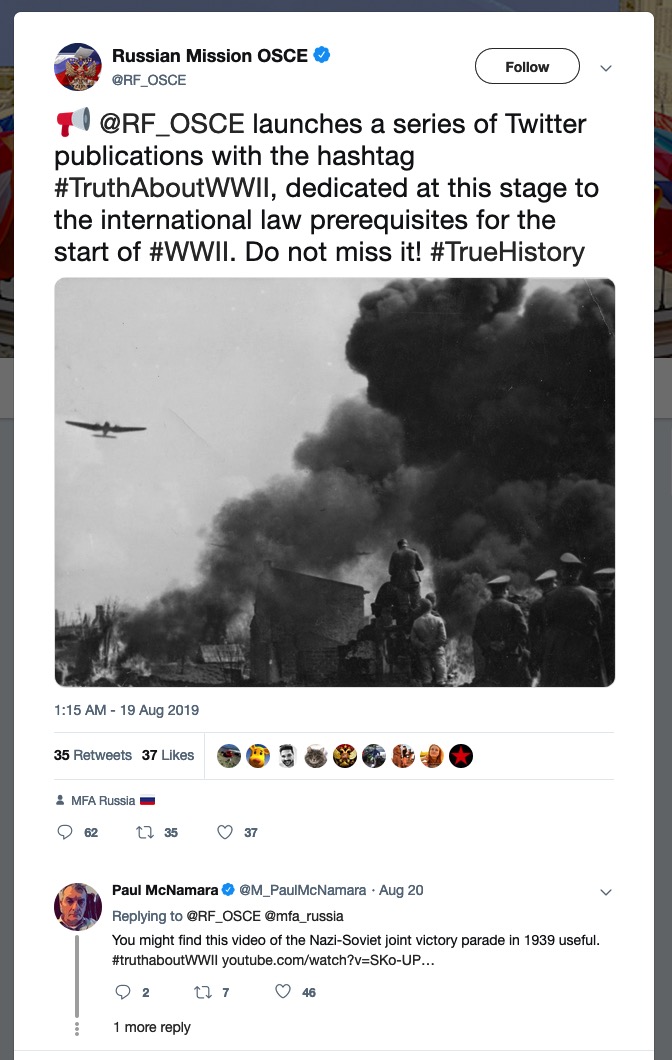 The Russian Embassy in the UK tweeted that “genuine documents [are] essential to understand our past and counter false narratives,” identifying itself as a proponent of “true history” and thereby discrediting all interpretations of the Molotov-Ribbentrop Pact opposed to its vision. Later, the OSCE Mission tweeted that Latvia and Estonia had also signed nonaggression pacts with Germany, though it left out the important fact that neither of those pacts divided Eastern Europe into spheres of influence. The Russian Mission to the EU tweeted an op-ed that transplanted modern foreign policy grievances onto the past. “Short-sightedness and Russophobia of Western politicians of that time paved the way to an enormous tragedy that should not be forgotten,” wrote the op-ed’s author, using a slippery term to condemn a perceived Western betrayal.

It’s debatable whether any of these interpretations are in fact “true.” At best, they are oversimplifications; at worst, they are blatant revisionism. Without a doubt, though, the formerly annexed countries were displeased — and thanks to Twitter, they could tell the Russian MFA family exactly what they thought. On August 23, Lithuania’s Foreign Minister tweeted: “80y ago Nazi Germany invaded [Poland]. USSR followed soon. This traitorous aggression was direct outcome of criminal Molotov-Ribbentrop Pact.” Later, the Estonian MFA rejected the Russian MFA’s claims “that Estonia was ‘liberated’ by Soviet troops”. On the contrary, it argued that “The so-called ‘liberation’ was occupation that lasted nearly 50 years.”

Not to be deterred, the Russian MFA family struck back. The Russian MFA demanded that the Lithuanian Foreign Minister “Stop rewriting history!” Meanwhile, the Russian Embassy in Estonia had a strongly worded reply for the Estonian MFA: “Each side has its own perspectives. But there is only one truth, which is based on facts. And this holds that the Red Army liberated Estonia in September 1944, suffering huge losses, after bloody battles with Nazi Germans.” 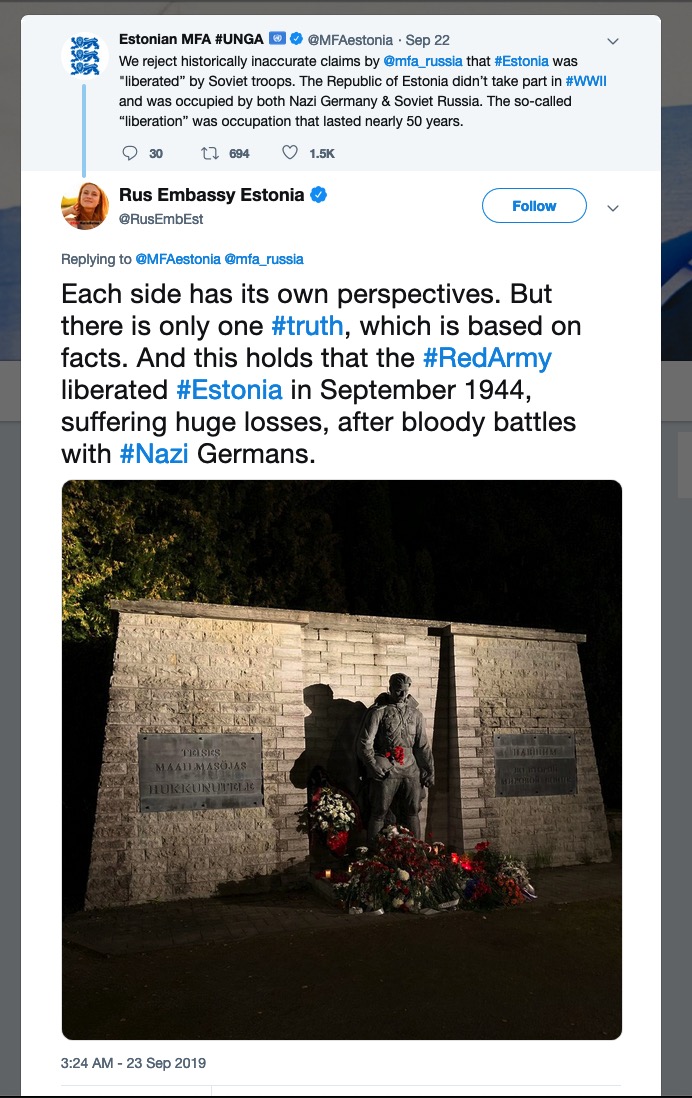 Although the Russian MFA Twitter family makes much ado about historical truth, what’s really at stake is here is Russia’s legitimacy, at home and abroad. If the Soviet Union had in fact committed atrocities, if it had not so straightforwardly “liberated” Eastern Europe, then how could the international community respect its successor state? And if the Soviet Union wasn’t the savior of Europe, then what else in Russian history can Russians be proud of? Twitter makes it easy to see these insecurities up close. Unfortunately, it does not make it easier to resolve them.

History is being increasingly politicized. Case in point, a recent documentary about the 1968 Soviet invasion of Czechoslovakia.

In the spring of 1939, world war appeared inevitable. Hitler was on the march in Europe and the Soviet Union was looking to avoid war for as long as possible. By August, Stalin had decide to cast his lot with Hitler...

How a Russian deals with the hostility from Baltic residents about the events of 1940, even when one does not agree with or condone them.

The Guns of Autumn

On the 80th anniversary of the start of World War II, we review the final events leading to its outbreak in 1939.

Caught in the Crossfire: The Annexation of Estonia

After just 22 years of independence, in 1940 Estonia was overrun by Soviet troops. The Estonian Socialist Republic was set up in the wake of th Molotov-Ribbentrop Pact, in violation of nearly all existing legislation. And Stalinism's evils had the Estonians, just a year later, greeting German invaders with open arms. But trading one totalitarian dictator for another didn't solve the problem.

Germany's efforts to occupy the Soviet Union during WWII and executions of thousands of Jews on Russian soil.

What a Difference a Border Makes