Legend has it that tea originated in China, in the third century BC. Shen Nong (emperor, ca. 2737 B.C.) discovered that the boiling of drinking water reduced illness. On a certain summer afternoon, Shen Nong was traveling and stopped for a rest. His servants began boiling water to drink. As the water simmered, leaves from a bush nearby fell into the pot and produced a brown, aromatic brew.

Ever curious, Shen Nong sampled the brew and found it to be good; thus, tea was discovered, or so the legend goes. Tea quickly spread throughout the Chinese realm. Lu Yu wrote the first known book on tea, titled Ch'a Ching. Lu Yu lived in ca. 800 BC, was an orphan who was raised and educated by Buddhist monks. He did not take much of a liking to the monastic life style and, as an adult, became a performer. Tired of traveling, Lu Yu went into seclusion for five years to write. He produced the first definitive work on the many methods of growing and preparing tea that existed in ancient China. Lu Yu's work employed a considerable amount of Zen philosophy, pointing to the powers of peace, balance and harmony obtained from tea. Ch'a Ching was applauded by the Chinese emperor and, later, adopted by imperial Japan.

Russia was introduced to tea in the mid-1600s. The Chinese ambassador to Moscow made a gift of several chests of tea to Tsar Aleksey Mikhaylovich. During this period, Russia was attempting to establish trade with China and tea soon became one of the desired imports. In 1558, Tsar Ivan IV, provided the merchant family, Stroganov, possession of Siberia. The only catch was they were obliged to colonize the vast region. The Cossacks, who were used by the tsars for protection of frontier lands, established communities along the free steppe. In 1581, the Cossacks reached the river Irtysh and the Yenisey in 1610. In 1645, the Russian explorer, Deshnev, reached the coast of the Pacific Ocean. Resulting border disputes between Russia and China were resolved, at least for a time, by the Treaty of Nerchinsk (1689). The Treaty identified a common boundary line between China and Russia, making it possible for trade caravans to pass peacefully between the two empires.

The trade route between China and Russia was a treacherous one. It consisted of roughly 11,000 miles over barren and mountainous terrain. The journey to and from Moscow took over 16 months. These factors made the cost of tea extremely high and, thus, quickly became a luxury available only to royalty and the very wealthy of Russia. By the end of the 1700s, tea prices had gone down somewhat and tea was making its way into Russian society.

Tea was appealing to the Russian life-style because it was a warm and hearty brew. Russians have always preferred a strong, dark brew which is sweetened with sugar, jam or honey. Other cultures affected the early tea customs of Russia. The samovar, which was an adaptation of the Tibetan hot pot, served both as heater and source of boiling water with which to brew the tea. Tea was, and still is, sipped from podstakanniki (under the glass); silver holders which hold the heat tempered tea glass. The podstakanniki are very similar to Turkish coffee cups.

The overland trade caravans ceased to exist when the Trans-Siberian Railroad was completed in 1900. To this day, tea and vodka are the two primary beverages in Russian society.

Even though tea was brought in from China, Russia has developed its own unique traditions surrounding this drink. Early teapots were oval in shape with long spouts and a thick handle.

Typical Russian tea is a combination of two or three types and flavors. These different teas are brewed dark and in separate pots. When mixed together in the cup, additional hot water is added to dilute the mixture.

The teapots are designed to sit one atop the other with the bottom pot holding the hot water. The next pot, typically, will be a very dark tea followed by a pot of herbal or mint flavored tea. Stacking the pots, not only saves space, but enables each to stay hot longer. 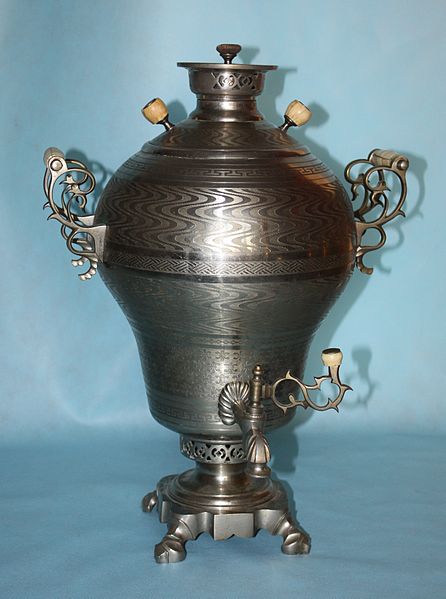 The samovar has served as Russia's teapot since the mid-1700s. By 1800, the samovar had become a cherished focal point of the Russian household and was the centerpiece of any social gathering. Samovars did and do vary in size. Some are very small, holding only three liters of water, while larger, 30 liter samovars do exist. Most Russian samovars have been manufactured in Tula, a metalworking center south of Moscow. The largest teapot of record was made in Tula, in 1922, and held a whopping 250 liters!

The earliest samovars resembled English tea urns but had a spout and handle instead of a tap. Russian samovars were/are made of various metals; copper, bronze, iron and silver being the most typical. These are not simple pots. Rather, Russian samovars quickly became an expression of functional art. With the high price of tea, as mentioned earlier, the samovar was both functional and a symbol of affluence. The warmth and aroma of the brew symbolized hospitality and security. As is customary with the British, the lady of the house would serve the tea to her family and guests. The very wealthy would have two samovars; a plain one for everyday and an ornate one for company.

To boil water for tea, you didn't need to sit the samovar on the stove. This unique appliance accomplishes its task, thanks to a tube which is soldered to the body of the samovar and holds smoldering charcoal or wood. The heat from the charcoal boils the water and keeps it hot. A small teapot sits on top of the samovar which held the dark, concentrated brew. Water from the samovar is used to dilute this tea when served. Today, the factories produce electric samovars. While many are still made using the highly polished metal used for the old samovars, many modern samovars are decorated with beautiful paintings .

Tea was/is taken with all meals and pretty much any other time of the day. Samovars were present in homes, trains, offices and restaurants. You would even see street vendors, with samovars, selling hot cups of tea.

Russia began making her own samovars in 1820, in Tula. The earlier imports were plane, purely functional pieces. Once Russian production began, the samovar became a work of art with fine tooled metal appointments, engraving, decorative handles and, eventually, paintings. While Tula is the undisputed center of samovar production with roughly 40 factories by 1900 which produced about 630,000 appliances a year. The most famous of these factories was Batashev Metalworks with an annual production rate of over 100,000.

The smaller samovars were about 18 inches tall and were for home and office use. They could be a simple urn or be equipped with, in the case of traveling samovars, with removable legs and drawers for food.

The brewing of Russian tea is different from what most folks in the west are familiar with. In England and the U.S., the desired amount of tea bags or loose leaves are placed in a pot, boiling water is poured over the tea and it is allowed to steep for about 5 minutes and consumed immediately.

The Russian process is much different. A small pot, such as the one seen atop many samovars, is used to produce zavarka. This is the dark, concentrated brew. A considerable quantity of tea leaves are placed in this small pot along with boiling water. The minimum brewing time is 5 minutes with zavarka being used throughout the day and even the following morning for breakfast. When someone wants a cup, a small amount of zavarka is poured into their cup with a greater quantity of hot water to dilute the brew.

The type of tea used is important. If you used English tea for this procedure, it would become quite bitter if left to stand for several hours. A dark loose tea from India, or a Chinese black tea such as Keemun, coupled with a natural herbal or fruited tea is my favorite. Another favorite is Russian Caravan. This is a blend of Indian black teas with a slightly smoky flavor.

Tea as a dessert is also popular. Take a spoonful of your favorite jam with each sip of unsweetened tea or serve fine chocolates with the tea. A real treat! Most of all, remember that tea, in Russia, is not just for tea time. I like to think that the warmth, comfort and hospitality that tea symbolizes, in Russian culture, is why it is offered at every meal and anytime during the day, especially when family and friends are gathered.

1963
The US Senate ratified a treaty with England and the Soviet Union that limited nuclear testing.

How to Celebrate the New Year

The Most Beautiful Village in Russia