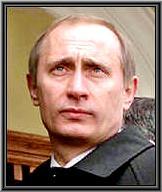 Russia has a new acting president. Prime minister for just five months, Vladimir Putin is now at the helm of the Russian government, thanks to the New Year's Eve surprise resignation of President Boris Yeltsin. So, who is this man, what is his background and what are his aspirations for Russia's future? In brief, Putin is a former KGB agent, a black belt in judo, the owner of an adorable toy poodle, and a politician known for tough talk, yet a soft side, as well.

Vladimir Putin is 47 years old; born October 7, 1952. He hails from St. Petersburg and is the son of a locksmith. Putin spent twenty years in the KGB as a spy, mostly in East Germany, and goes by the nickname the hawk. Putin graduated from St. Petersburg's (then Leningrad) law school in 1975. He is married and has two daughters.

Putin was working in Russian intelligence when Yeltsin appointed him prime minister on August 9, 1999. Putin became acting president on December 31, 1999. There's a bit of irony here. Yeltsin bitterly despised the KGB and was under their close scrutiny in the late 1980's. Putin is very popular with the people, is respected for his dealings with Chechnya and maintains close ties with leading Western market reformers from St. Petersburg. His best known associate is Anatoly Chubais who was instrumental in the efforts toward privatization in the early '90's. In fact, Putin stated, in his first speech as acting president, that he considers freedom of speech, conscience and press and the right to own private property as fundamental human rights of a civilized culture.

During the last five months of Boris Yeltsin's time as president, Putin was running much of the daily business of state. State television has followed Putin's activities with great interest. He portrays a very different image from the older, more stately Yeltsin. The Russian people have seen their, then prime minister, giving judo demonstrations and running a lap around a Chechen village. Putin is a younger man and his energy and endurance show. He is considered to unbeatable in the March 26, 2000, presidential election.

All this being said, we know very little else about who Vladimir Putin is. His political rhetoric sounds familiar. He promises to support ongoing economic reforms, put greater emphasis on social issues and welfare and continue Yeltsin's foreign policies and military reform. Putin envisions a multipolar world rather than the existing, in his opinion, U.S. and NATO dominated globe. Putin seems to intend to return Russia to her former glory and world presence, but in the the modern world of technology and business. He, also, seems to hold in high priority the quality of life and well being of all citizens.

Two days before Putin's appointment as prime minister, Chechen rebels launched an attack on the republic of Dagestan. The terrorism escalated with apartment building bombings and hundreds of Russian civilian deaths in Moscow and other Russian cities accredited to the Chechen rebels. Many Russians were overjoyed when Putin took a hard-line stand against the rebel republic and ordered bombing runs, heavy artillery and thousands of ground troops into the region. This aggressive action has caused many Russian voters to think that, if Putin has what it takes to deal with the situation in Chechnya, he may be the person who will be able to turn around Russia's economic crisis.

Putin used his popularity and new position to endorse the Unity party in the December, 19, 1999, Duma elections. As a result, Unity came in just behind the dominating Communist party. However, the combined votes of the Unity and other centrist parties exceeded that of the Communists. Thus, a new Duma, elected by the people, is very much pro-Putin. Putin is seen as a young, adventuresome and vibrant individual who is willing to take chances and do whatever is necessary to achieve a better life for the Russian people.

Putin agrees with Yeltsin regarding their disapproval of U.S. and Western criticism and attempted intervention in the Chechen affair. Chechyna is a Russian republic, thus, the crisis in considered, by Russia, to be an internal issue; one that is not one else's business. At the same time, Putin is very interested in maintaining a good relationship with the U.S.; afterall, it is in both country's best interest. He has been quoted as saying he would welcome a visit, to Moscow, by President Bill Clinton and would gladly visit Washington, DC, if invited.

Acting president Putin has been rather vocal about his take on the economy and what needs to be done. He is in favor of a regulated market economy, but opposes both the more liberal approach of the West and any system similar to that of the Soviet era. While Russia is no longer a Communist nation, Putin points out that she will never become a democracy by Western form and definition. He states that, because of the Russian history and the nature of Russian society, the people want and need a regulatory state which is determined by the traditions of the nation. Putin has pointed out that Soviet Communism failed because it did not cause the nation to prosper and its people were in bondage and not free.

Putin is in favor of a slower reform process. He has proposed a fifteen year plan to improve foreign investments and, at the same time, the quality of life for the Russian people. It seems that he believes that the best and most permanent reforms come with time as apposed to quick fixes.

Of great interest is Putin's career in the KGB and intelligence. From 1984 - 1990, he served as a spy in Dresden, East Germany. This duty was proceeded by a nine year stint and a KGB internal affairs officer in St. Petersburg. While he is very popular, there is considerable concern, primarily by other politicians and international leaders, regarding Putin's motives. On December 18, 1999, Putin and his wife, Lyudmila, attended the 25th wedding anniversary party of a former KGB agent at Dzerzhinsky Square. This building currently houses the FSB, post-Soviet version of the KGB. Feliks Dzerzhinsky was the founder of the KGB back in 1917. The Putins were warmly welcomed. The question on many peoples' minds is this; is Putin a democrate as he says, or is he really so-called Chekist or one who adheres to the tactics of the old secret police? Frightening to some is the report that, at this party of former KGB agents, former KGB chief and prime minister, Yevgeny Primakov, offered a toast. He ask that all who defined themselves as Chekists to stand up. As the report goes, most did, including Putin.

Putin began his political career in the early 1990's as the aide to St. Petersburg's mayor at the time, Anatoly Sobchak. He later was appointed as the first deputy head of the city government, in 1994. When Sobchak lost his mayoral bid, in 1996, Putin was brought to Moscow to serve as deputy to Pavel Borodin, the manager of the administration's properties; Kremlin, residences, office buildings, etc. Putin was soon put in charge of relations between the Kremlin and Russia's regions. He was noted as being an imperialist because he refused to give regional leaders more power and walked a pro-Kremlin line. Yeltsin appointed Putin as secretary of his Security Council, in March of 1999.

Vladimir Putin was instrumental in the launching of the brand new, official Russian Federation Government website. It is in both English and Russia. This is an excellent, informative and up to date site. Be sure to read, Russia at the Turn of the Millennium, written by Vladimir Putin. This article outlines, very clearly, Putin's assessment of the Russian condition and his solutions for the future.

In a recently released report, it is stated that Vladimir Putin was awarded a decoration for service, the Bronze Order, from East Germany's Stasi during his years as a KGB spy in this country. The award was given by former Stasi chief, Erich Mielke, to Putin in 1988.

What a Difference a Border Makes