It is the great, cruel paradox of World War II in Russia that heinous, unanswered crimes coexisted with truly heroic, astonishing human achievement. That – be it out of fear or love of the Motherland or self-defense – Soviets fought so bravely to defend a system that treated them like cattle, confiscating from them the land, the bread and the peace that the Revolution had allegedly been all about, shipping them and their relatives off to Siberian labor camps, sentencing soldiers unfortunate enough to have been captured in war into “penal battalions.”

Taken together, these three books offer a stunning and deeply documented indictment of the Stalinist regime. Timothy Snyder’s Bloodlands is the most unequivocal. “At a great distance,” he writes, “we can choose to compare the Nazi and Soviet systems, or not. The hundreds of millions of Europeans who were touched by both regimes did not have this luxury.” Trapped between colluding or colliding totalitarianisms, between 1933 and 1945, some 14 million Europeans perished as a result of non-combat, deliberate killing policies of the Hitler and Stalin regimes. And that is more or less a low estimate. The number could have been as high as 21 million, Snyder asserts. The crimes, Snyder explains, were committed under cover of Big Lies, the pursuit of unattainable utopias: “Stalin’s utopia was the forced collectivization of the Soviet Union in 9-12 weeks, Hitler’s was to conquer the Soviet Union in the same span of time…” When the utopias instead lead to catastrophe, Stalin and Hitler “blamed the enemy of their choice, and then used the death of millions to make the case that their policies were necessary or desirable.” This is a harrowing history that succeeds by connecting individual tragedies with epic events and trends, drawing on an amazing breadth of research.In Leningrad, Anna Reid explores one particularly inexcusable horror: the Siege of Leningrad. And she focuses mainly on the first, deadliest winter of 1941-2. 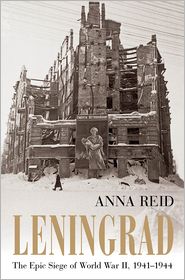 One might wonder what new there is to write about the Seige, given Harrison Salisbury’s monumental 900 Days. But that was published in 1969, and much more has become known since then, archives have been opened, diaries discovered or disclosed. And it is on diaries and the words and memoirs of those who experienced the Siege firsthand that Reid’s moving documentary is based, stripping away painfully encrusted ideological versions of the Seige. While Reid does seek to understand how the Siege could have been allowed to happen, and to show that it might have been far less deadly had Russia been ruled by a different regime, her main intent is for the Siege to be a prism for examining the human experience, “to remind ourselves of what it is to be human, of the depths and heights of human behavior.” That human dimension is also of interest to Frank Ellis, in The Damned and the Dead. Ellis is concerned with constructed memories of the War in Soviet and Russian literature. It is an ambitious and thorough survey of the works of writers from the 1940s to the 1990s, from Grossman and Simonov to Astafyev, Bykov and Vladimov, and it is superb in showing that, censorship notwithstanding, there has never been just one clear and uniform view of the War. Yet one of the central themes of these works, Ellis finds, is the untenable dilemma of the Red Army soldier: “How is it possible  to wage a just war against Hitler and on behalf of Stalin and his regime?”

On the Tragedy of One Family... and an Entire People

Monstrous Protests, Mobile Plants, and Too Much Paper