Pashka Bystrov, known around the village as Speedy, was leaning back against the warm stove and despondently watching his wife, Galka. Her hair still in curlers, she was tossing her dresses, skirts, and fleece tights into a suitcase, wadding up her feather-light stockings, and yelling at him that she was sick up to here, and then some, with village life, and she wanted to hear her heels tapping on asphalt and get a proper salon perm. Pashka had no arguments against any of that, so he just smoked, sending soft, grayish circles up toward the ceiling. When the door slammed shut behind her, Pashka felt a sudden surge of the rage that had been burning him up inside for months now, hauled off, and smashed a fist into the wedding photograph that hung on the wall, framed behind glass. Then, licking the blood from his fingers, Pashka groped around in the basement for a bottle, wrenched out the cork, and drank the whole thing without bothering about a glass. And promptly fell asleep.

The state farm that went bust a couple of years earlier had allotted plots of land to the workers, but that land was worthless, impossible to plow, more bogs and gullies than anything else. And selling it would bring in small change, at best.

Everyone who was able to scattered, to the towns and the cities, but those who as children had fallen heart and soul for the dense stands of pine and the clean little river, who couldn’t have hacked it in a human anthill – they stayed in the village, to live out their days there. And somehow they slogged through it. Whoever could still muster the strength did the traditional potato planting around May Day, brined their cabbages in fall, drove the webby-footed gray geese to the pond, and kept empty-headed, bleating sheep, although there’d long been no call for their wool. Then all of a sudden outsiders came, quickly set up a logging operation, hired guys for hilariously stingy wages, and again life flowed on. Not exactly a river of life, but… well, a rivulet at least.

Being a technically minded fellow, Pashka was brought on to drive a skidder tractor, and the wages weren’t bad, so the only bad thing was that Pashka was being eaten up with yearning. When the state farm’s property was portioned out, Pashka got a lousy little tractor, which he fixed up, and now he’d plow the old girls’ household plots so they could plant their potatoes or he’d shove snow off the road in winter. A tractor driver’s always held in high honor, because he can haul manure to the fields or take some old girl on her last journey.

Pashka did let his hut go, though. And well he might, because where’s he supposed to wash and rinse the curtains? When’s he supposed to swing a broom after a hard day’s work? So the spiders had come crawling in and made themselves at home in the corners, and a mouse had gnawed at granddad’s chest of drawers, and the general air of neglect grated worse than sandpaper on Pashka’s soul.

Aside from Pashka, there was almost no one left in the village, only Granny Zhenya, his next-door neighbor, and Grandpa Stepanych, and he lived out by the forest. But one day – a day off, it was – a car rumbled up, and doors slammed, and he heard something resembling voices. He looked out, and in a neighbor’s yard stood a young woman, dressed like a townie and surrounded by bundles and suitcases. The local ragamuffins were scampering around, and a dog was barking. Pashka hollered from his porch (joking, like), “Hey-ho, neighbor, I don’t seem to know your face. Who would you be?” But she turned around and said, “Really, Pash, you don’t know your own people?” And it was Lenka, Granny Sima’s granddaughter. Old Sima had died long before, and Pashka hadn’t seen hide nor hair of Lenka since the wake. A puny little thing she’d been back then, just a chit of a girl. Huge eyes, skinny as a rake, and more trouble than a grandma’s nanny goat. But look at her now, the beauty she was, with that well-turned figure. She really had it all, and her eyes were just the same. Pashka put two and two together and made four. She’d lived awhile in town and had a son, but it didn’t work out, so she’s back. But what for?

Pashka swept her a low, joking bow and went back inside, to his sofa. He turned on the television. It was an American movie, with shooting, lots of bloodshed, and people behaving badly – something nice to fall asleep to. And when he woke, it was morning, early and gray. He did the usual, rattling the bucket down the well, giving the chickens their feed, having a quick shave, and gulping down his tea with a hunk of bread and a wedge of cheap sausage before heading off to work. But all day long, he couldn’t get that Lenka out of his head. She’d grown up pretty enough to make his heart quiver whenever he thought of her.

And that’s when the one-sided staring contests started. He’d see Lenka stacking wood, and he’d go up and shoulder her out of the way. Let me, he’d say, it’s no big deal. And he’d haul so much water for her that she had to go out at night and drain half the barrel. In spring he took his tractor to dig up the potato trenches – and nearly screwed his head off, looking at Lenka all the time she was sorting the potatoes into buckets. And that kid of hers, little Igor, was smart and savvy. Pashka even gave him tractor rides and took him out to the hayfield, because why not? The boy needed to get used to all that.

So it went on, for about a year. At one point, Lenka and her son went to see their folks for a week, and Pashka stopped sleeping, plain and simple. He was forever finding a way to just happen to be out on the road. I’m taking a walk, he’d say, don’t mind me. But actually he was gazing out toward the highway. And his pals would want him to go fishing, and his granddad would call about making a visit to the bathhouse and having a drink or two. But he never went anywhere; it was all he could do to get himself to work. Then when Lenka came back, when he saw her, he nearly ran his tractor into a fence.

“Pash,” Lenka said between peals of laughter, “Why’re you so red? Fresh from the bathhouse, are you? Or did you get too much sun?”

Pashka grumbled something in reply, ducked into his house, and beelined it to the sofa. He plastered himself to the wall and said to himself: “I love her. That’s what it is. No way I can live without her.” Then he stood up, splashed his face with water at the sink, combed his hair into a side part, and went to her place. To talk.

She opened the door but didn’t ask him in, just stood there with a look that said “Now what?” And he was so agitated, all his words clumped together and stuck in his throat, and he couldn’t say hey, yay, or nay. He stood there for a while, gave up, and left. The whole winter he’d gawk at her from behind the curtains, but at night he’d clear the snow from her pathways, chop kindling for her – and was afraid to show his face.

Then spring came. It was March 8, Women’s Day, right there on the dot. At work, Pashka and the other guys congratulated the women, drank sickly sweet wine, and gave them each a bunch of wilted tulips. And Granny Klava whispered into Pashka’s ear, “Have you fallen in love, my boy?”

Pashka thumped himself in the chest. “Who?” he asked. “Me? What would I want with that? I’m footloose and fancy-free…”

“No you’re not,” Granny Klava said. “I can see somebody’s caught that fancy of yours. You’re all shriveled up with love. You should go a-courting, dearie, and have done with it. Such a girl she is! A blazing fire! If one of the summer people whisks her away, you’ll be kicking yourself. Buy her a ring, get down on one knee, and say, ‘Here, Lena, take my hand and my heart!’ And that’ll be that.”

“Now where am I going to find a ring?” the dumbfounded Pashka wanted to know. “The stores are closed.”

“This’ll do you,” said Granny Klava, giving him a thimble. “Give her this for now.” 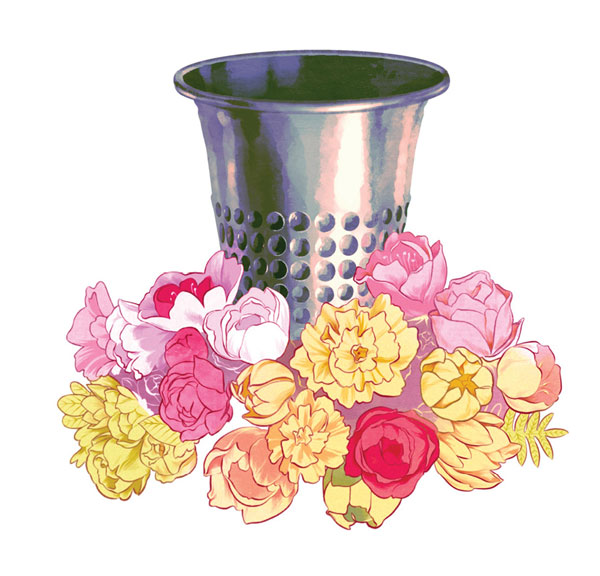 Pashka turned the little cap-shaped thing around and around. “But it’s a thimble,” he said. “Where’s she going to put it?”

“On her finger, that’s where!” Klava was what passed for a wise woman in those parts. “You’d think a thimble goes on your thumble, but it don’t. It goes on your finger, so it’s nearly a ring.”

And Pashka was off like a shot. But evening had come, the ice had started breaking up, so he was slipping and sliding. Still, he ran all the way to Lenka’s house, and then what? Yell? He’d wake everyone up. So he decided to throw snowballs. At the wall. But one veered off, toward the door, and that was exactly when Lenka opened up, so she got it square on the forehead.

“What d’you think you’re doing, you hoodlum?” a furious Lenka wanted to know. “A grown man, and acting the fool all the time!”

Pashka went up to her, put the thimble on her finger, and said, “Marry me. I’ll be little Igor’s pa.”

Lenka tore the thimble from her finger, flung it away so hard it jingled when it landed, and said, “So I can darn your socks? Oh, joy!”

And bang went the door. Then she locked it.

Pashka shuffled back to his hut and was again gripped with such yearning, such pain, that he guzzled a good half-bucketful of chilled vodka, fell back onto the sofa, and howled at the very top of his lungs. But while he was staring at the wall, he didn’t see Lenka, bundled up in a jacket, wandering around her yard with a flashlight. She was looking for the thimble. When she came back in, her son asked, “Did you lose something, ma?”