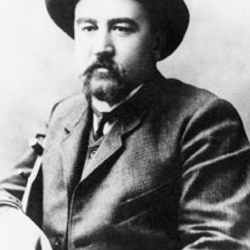 Alexander Kuprin (1870-1938) was a military officer, journalist and writer. At the heart of most of his works is the contradiction between people’s greatest hopes, their striving for purity, and the ugliness and severity of the life that surrounds them. After the 1917 revolution, Kuprin initially sought to reconcile with the new regime, yet soon joined with the Whites, editing a journal published by the staff of General Yudenich. After Yudenich’s defeat in 1919, Kuprin ended up in exile – for him a difficult and tragic time. He was very ill when, in 1937, one year before his death, he returned to the USSR.