The ancient forerunners of the Russian people was the Slavs. These indigenous peoples inhabited the better part of eastern Europe and in western Russia and Ukraine. Rurik is the name of the ancient Norman warrior (ca.AD 830 - 879) who is believed to have been the founder of the first Rus' state at Novgorod. Rurik was a prince of the Skandinavia Vikings, also known as Varangians, who took control of the region and the Slavs. Rurik's fellow tribesman, Oleg (aka Helgi), is said to have founded the principality at Kiev; now the capital of Ukraine. Rurik's son, Igor, was Oleg's successor and marked the beginning of the Rurik Dynasty which ruled until 1613. (1598). The year 1613 marked the beginning of the Romanov Dynasty.

Ivan IV (The Terrible) was born in Moscow (1533), the grandson of Ivan III (The Great) and was crowned as the first Czar (also spelled Tsar; variation on the Latin caesar) of ancient Russia (1547). The coronation took place in the Uspensky Cathedral (Assumption) in Moscow, the seat of the Holy Russian Empire. This is the church where the Russian tsars have been crowned ever since. 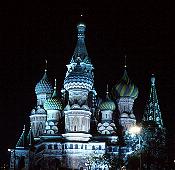 The early years of Ivan IV's reign was a time of great reforms, expansion and consolidation of power and rule in Moscow. The balance of his rule, until 1584, was marked by inconceivable brutality. Legend has it that Ivan put out the eyes of the designer of St. Basil's Cathedral so that the architect could never create such majesty ever again (1560). Ivan reigned terror on the city of Novgorod, killing thousands of its people, all because there had be rumors that they city was conspiring against him (1570). In 1580, Ivan personally murdered this oldest, and supposedly favorite, son and heir, Ivan.

Ivan's centralized power was complete when he took over the last remaining independent principalities from the boyars (nobles). He took possession of their land, using it as gifts to those loyal to him. These land grants were hereditary, thus Ivan IV is credited with creating the beginnings of the system of masters and serfs. As a result of a war with Poland and Sweden, Ivan lost his northern most Baltic territories (1582). Ivan died in 1884, leaving Moscovy in political and economic disarray.

Time Of Troubles was ushered in by Ivan IV's heir and son, the incompetent Fyodor I (1584-1598). Boris Godunov, Fyodor's brother-in-law, was appointed regent (Lord Protector) and is credited with the actual running of the government until 1605. During the Godunov period, the Moscow Patriarchate is established (1589), Dmitri Tsarevich is killed (1591) and there is widespread famine. Godunov was seen as such a pivotal figure in Russian history that an opera was written by Modest Mussorgsky, about his life and political career.

The end times of the Rurik Dynasty, and before the beginning of the Romanovs (ca. 1598 - 1605), is known as the Time of Troubles. Fyodor I died in1598. Godunov, who was not a Rurik by blood or even nobility, was elevated to the throne by the Imperial Assembly. The Assembly was comprised, primarily, of disgruntled land owners. Godunov ruled, officially, from 1598 to 1605. This is the period known as the Time of Troubles. The impire was besieged with widespread famine which resulted in unrest among the serfs, boyars and Cossacks. The latter was a combined ethnic group, most of which had Slavic roots. They were a warring group of people, always prepared to do hand-to-hand battle. The Cossacks colonized Siberia and are credited with the establishment of most of today's Siberian towns. Most were peasant-soldiers who gained privileges in return for loyal service to the tsars. In the 15th and 16th centuries, the highest concentration of Cossack settlements were along the Dnieper and Don rivers. They fought against the Red Army in the civil war of 1918-1920 and most of their lands were, later, collectivized by the reigning Soviets.

The youngest son of Ivan IV, Dmitri, died under suspicious circumstanced, in 1591. Godunov died in 1605 and his 16 year old son, and heir apparent, Fedor Godunov was murdered along with his mother. A man claiming to be Dmitri came on the scene in Poland. This Dmitri claimed to have escaped the attempt on his life and demanded his rightful place on the Russian throne. This false Dmitri, backed by the Polish nobility and their armies, successfully obtained control of Moscow and the throne left vacant by Godunov's death. But this success was short lived and this Dmitri was soon assassinated just two weeks later.

This false Dmitri was replaced by a boyar named Vasilii Shuiskii, in 1606, who was backed by the Swedes. The Poles were determined to take over Moscow and, in 1610, attempted to put a second Dmitri on the throne. This attempt was somewhat more successful and the Poles gained control of Moscow and its outskirts. At the same time, Cossack faction, known as the Baby Brigade, endorsed the infant son of the second false Dmitri who had been killed by his own men. Eventually, the Cossacks, loyal to the throne, regained control of Moscow, in October of 1612.

In 1613, the Council of All Russia selected Mihail I. Fedorovich who ruled from 1613 to 1645. Thus began the Romanov Dynasty which survived until the Bolshevik takeover in 1917.

The Time of Troubles was marked by total upheaval. There was no heir to the throne and no centralized national leadership. This left the impire open to outside invasion and attempted take-over. Already disgruntled peasants, soldiers and noblemen split into rebellious factions. To top it off, there was wide spread famine and, thus, hunger and sickness. It's not surprising that many saw the time of the Bolshevik Revolution and subsequent civil war as a repeat of history. There are those who fear another repeat in contemporary times. With Russia's current economic crisis, political uncertainty and heavy criticism by other nations, this fear is not without basis.

1945
Instruments of the surrender of German forces in WW II were signed by General Jodl, the German chief of staff, at General Eisenhower's headquarters in Rheims.

1940
Ranks of General and Admiral reintroduced into the Russian Armed Forces, replacing terms like "komdiv and "komandarm" put in place in 1935.

1875
Treaty of St. Petersburg. Russia gains all of Sakhalin, Japan all of Kuriles.